Items related to No Bones: Author of the Man Booker Prize-winning novel...

No Bones: Author of the Man Booker Prize-winning novel Milkman 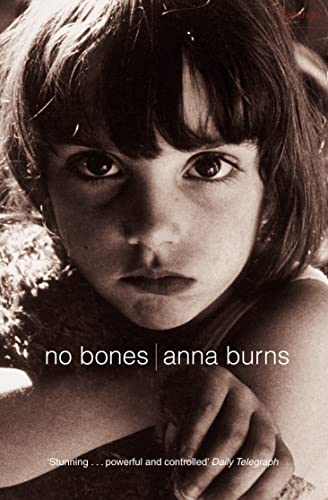 SHORTLISTED FOR THE ORANGE PRIZE FOR FICTION 2002 a stunning debut novel about a little girl growing up in the Ardoyne area of Belfast.

Every single night and every single day Amelia goes upstairs to look at her treasure: a miniature plastic sheep, a Black Queen chess piece, a penny prayer for serenity, a tube of glitter and thirty-seven black rubber bullets she s collected ever since the British Army started firing them...

No Bones, Anna Burns' magnificent debut, is a heartbreaking but astonishingly funny account of growing up in Belfast during the "Troubles". Without meaning to diminish this wonderful and inventive work, it's possibly more accurate to describe it as a series of interlocking stories rather as a novel. At its centre is Amelia Lovett, a naïve, sensitive girl who matures, although never losing her youthful incredulity, as the book progresses. Her, often tragic life story is recounted through an array of characters, vernacular voices and episodes that with mordant humour track the sheer brutality of the era. Burns unflinchingly portrays the casualness, even banality, of the violence. The nine year-old Amelia easily drifts from collecting buttons to plastic bullets; teenage girls shoot each other in the playground; wayward youths are kneecapped and even a walk home from a disco can result in a "protracted, grisly and truly awful end."

What Burns manages to capture, through comic exaggeration, is a real sense of how fragile the boundaries of normality are. The sectarian killings are matched by equally senseless domestic feuds and conflicts. Amelia's mother's observation that "she could see that beating the crap out of her sister was one thing; kicking an IRA man to death or nearly was another" offers a measure of just how distorted their values have become. Amelia reacts to the madness around her by internalising the violence, choosing to harm herself rather than others; first by becoming an anorexic and then an alcoholic--dealt with in a mercilessly hilarious chapter where all of the booze-addled characters continually forget what they have been talking about. The schizophrenic Vincent however, retreats further into actual madness creating a fantastical carnival city with "Come and Get Your Dead" stalls and, all too real, imaginary gunmen. It's achingly sad but as so often in this magically realised book, the mingling of tragedy and surreal comedy proves deeply affecting. Burns has produced a compassionate, bitterly acute, witty portrait of the darkest days of Northern Ireland's history. No Bones could well emerge as Belfast's Dubliners.--Travis Elborough

'Not only hilarious but also terribly tragic and awful and human and wonderful... No Bones is the best book I've read for ages. The world Burns creates is utterly convincing and surreal at the same time. I love the writing, the way she rolls the words around... No Bones is absolutely fantastic, and explores really exciting territory... the tone and timbre of the novel feel quite different to anything I've read before.' Julia Darling

'A chilling recognition that most survived the Troubles intact but some people will never be the same again...This account of a girl's life growing up in Belfast during the Troubles, which examines madness and sanity and questions our interpretation of both, is scary. Scarily well written, too... No Bones tears chunks out of our Peace Process comfort blankets. For it questions how a peaceful, mundane existence can be superimposed on a society inured over decades to violence.' Martina Devlin, Irish Independent

‘Not only hilarious but also terribly tragic and awful and human and wonderful ... No Bones is absolutely fantastic, quite different from anything I’ve read before’ Julia Darling, author of Crocodile Tears

2. No Bones: Author of the Man Booker Prize-Winning Novel, the Milkman (Paperback or Softback)

Book Description Flamingo, 2002. Paperback. Condition: New. Paperback. SHORTLISTED FOR THE ORANGE PRIZE FOR FICTION 2002A stunning debut novel about a little girl growing up in Belfast, from the author of the Man Booker Prize winning novel, Milkman. 'Marvello.Shipping may be from multiple locations in the US or from the UK, depending on stock availability. 336 pages. 0.240. Seller Inventory # 9780006552383

7. No Bones: Author of the Man Booker Prize-winning novel Milkman

8. No Bones: Author of the Man Booker Prize-winning novel Milkman

9. No Bones: Author of the Man Booker Prize-winning novel Milkman