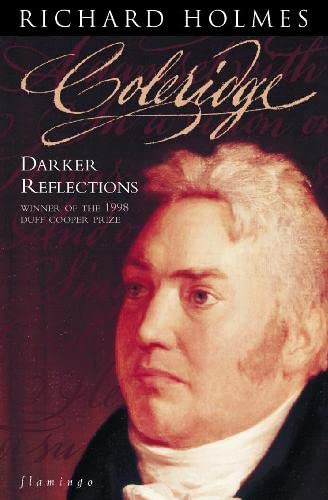 The first volume of Richard Holmes’s biography of Coleridge, Coleridge: Early Visions, won the 1989 Whitbread Prize for book of the year. Coleridge: Darker Reflections is the long-awaited second volume.

Richard Holmes’s biography of Coleridge transforms our view of the poet of ‘Kubla Khan’ forever. Holmes’s Coleridge leaps out of these pages as the brilliant, animated and endlessly provoking poet of genius that he was.
This second volume covers the last 30 years of Coleridge’s career (1804-1834) during which he travelled restlessly through the Mediterranean, returned to his old haunts in the Lake District and the West Country, and finally settled in Highgate. It was a period of domestic and professional turmoil. His marriage broke up, his opium addiction increased, he quarrelled with Wordsworth, his own son Hartley Coleridge (a gifted poet himself) became an alcoholic. And after a desperate time of transition, Coleridge re-emerged on the literary scene as a new kind of philosophical and meditative author.

From the reviews:
’One of the greatest biographies of the century. Pure joy to read, it is a shimmering portrait of the mature artist veering between brilliance and despair.’ Financial Times

’This – and I can’t remember ever thinking this before so strongly – is a biography to grow old with.’ MIRANDA SEYMOUR, Independent

This is the concluding volume of Holmes's definitive and thrilling biography of ST Coleridge. The book reads as a brilliant evocation of the Romantic age when a rigorous literary discourse was alive in England. Coleridge sat at the helm, a mad, loveable genius whose only life-long love affair was with opium. Holmes charts STC's oscillation between narcotic oblivion and the nightmare visions of withdrawal with the skill of a novelist. STC's inability to deal with the responsibilities of parenthood and his own finances left him in a state of constant poverty and guilt. Despite these afflictions, he managed to produce some of the finest poetry and philosophical prose in history. Financially and emotionally sustained by the love and loyalty of friends, every person he met fell under the spell, as de Quincey puts it, of "the greatest man that has ever appeared." At the heart of the story lies the volatile relationship with Wordsworth who plays McCartney to Coleridge's Lennon. Wordsworth comes across as an anally retentive, vain, ambitious operator who finally betrays Coleridge's love and friendship. The book is packed with quotes, which keeps the reader constantly close to the subject, and Holmes digs out detail that animates our hero at every turn. You'll find sex, drugs and poetry and a cast of stars (Byron, Shelley, Keats, Hazlitt, de Quincey, Southey, Carlyle, JS Mill) who revolve around Coleridge and his unfathomable mind. --Hannah Griffiths

'One of the greatest biographies of the century. Pure joy to read, it is a shimmering portrait of the mature artist veering between brilliance and despair.' --Financial Times