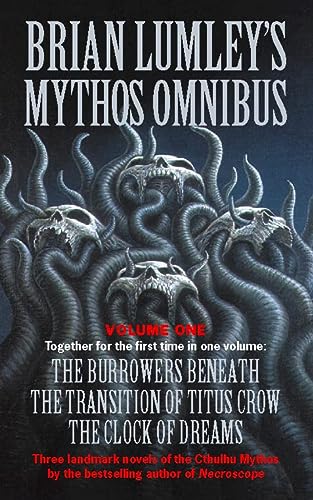 This omnibus edition includes The Burrowers Beneath, The Transition of Titus Crow and The Clock of Dreams. Titus Crow and Henri de Marigny are the crusaders in the cause of universal sanity against the evil, brooding forces of the Cthulhu Mythos and defy the demons of unknown space.

From the creator of 'Necroscope' – three landmark novels of the Cthulhu Mythos:

THE SAGA OF TITUS CROW!

'THE BURROWERS BENEATH'
In which Crow is alerted to a menace in the earth that gnaws at the very foundations of Man’s domination of his home planet – and seeks to usurp him! Two men share a terrible secret and make their lonely stand against subterranean terror.

'THE TRANSITION OF TITUS CROW'
Fleeing from the Burrowers, Crow discovers the secrets of time and space and learns the lore of the Great Old Ones. But Lord Cthulhu seeks not only the domination of Earth but the destruction of the Elder Gods and the space-time continuum itself! De Marigny answers Crow’s call from the depths of space to join him in the battle for universal sanity against all the forces of evil.

'THE CLOCK OF DREAMS'
From fathomless ocean depths, Cthulhu’s dreams disturb the minds of men to reshape the waking world. Diverted from his search fro the lost Elysia, de Marigny pilots his space-time machine into subconscious worlds of dream and nightmare in a bid to save the lives and very souls of Titus Crow and Tiania of Elysia.

In the companion Volume II:
'Spawn of the Winds, In the Moons of Borea' and 'Elysia!'

Brian Lumley was born near Newcastle. In 22 years as a Military Policeman he served in many of the Cold War hotspots, including Berlin, as well as Cyprus in partition days. He reached the rank of Sergeant-Major before retiring to Devon to write full-time, and his work was first published in 1970. The vampire series, ‘Necroscope’, has been translated into ten languages and sold over a million copies worldwide.