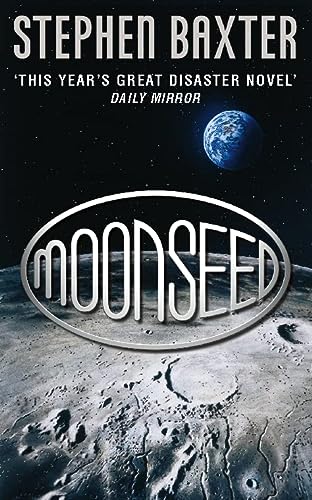 In the 1970s astronauts brought rock samples back from the Moon. Many remained locked away for decades ... including one unique piece of bedrock, the Moonseed. At last exposed to daylight, it proves to be deadly, though not to people. It kills the Earth.

In his new novel, Stephen Baxter, ‘the best SF author in Britain’ (SFX), contemplates rock – living rock. Transported to Earth by Apollo astronaut Jays Malone in 1972, a single shard of bedrock from the Moon contains within its innocuous-looking shell the power to destroy worlds.

Geologist Henry Meacher – his career at JPL in ruins, his marriage over – is given a sample of the Moon bedrock to analyse. He goes with it to Edinburgh University, the only place that will have him. There the deadly Moon rock accidentally comes into contact with the Earth’s core in the form of lava from Edinburgh’s famous extinct volcanoes. It turns solid rock to seething Moonseed dust. Soon perhaps the whole world will be infected.

Inspired, terrified, Henry Meacher is a changed man. If the worst happens, his plan is to take Earth’s displaced peoples from the Earth to the Moon. Baxter’s stunning story is one of disaster, desperate measures and damage limitation, forcing humanity to an excess of ingenuity and courage. Ironically, it is a newly terraformed Moon that holds the key to our survival...

Stephen Baxter established himself as a major British sci-fi author with tales of exotic, far-future technology. More recently, in Voyage, Titan and now Moonseed, he shows his love for the hardware of the real world's space programme. (Comparisons with Tom Wolfe's The Right Stuff have been frequent.) Moonseed is a spectacular disaster novel whose threat to Earth comes from a long-forgotten Moon rock sample carrying strange silver dust that seems to be alien nanotechnology-- molecule-sized machines. Accidentally spilt in Edinburgh, this "Moonseed" quietly devours stone and processes it into more Moonseed. Geology becomes high drama: when ancient mountains turn to dust, the lid is taken off seething magma below. Volcanoes return to Scotland, and Krakatoa-like eruptions spread Moonseed around the world. A desperate, improvised US/Russian space mission heads for the Moon to probe the secret of how our satellite has survived uneaten. Baxter convincingly shows how travel costs could be cut, with a hair-raising descent on a shoestring lunar lander that makes Apollo's look like a luxury craft. The climax brings literally world-shaking revelations and upheavals. Moonseed is a ripping interplanetary yarn. -- David Langford

Praise for The NASA Trilogy:

‘VOYAGE is, quite simply, a brilliant book . . . skilfully constructed and enthrallingly told’
SFX

‘Baxter handles a complex and gripping plot with his customary aplomb... The ending will blow your mind. Buy TITAN, read it – and then go out and buy everything else that Baxter has ever written’
NEW SCIENTIST

‘A plausible tale of America’s last gasp at interplanetary exploration... Stephen Baxter proves what a cosmic thinker he is’
WASHINGTON POST