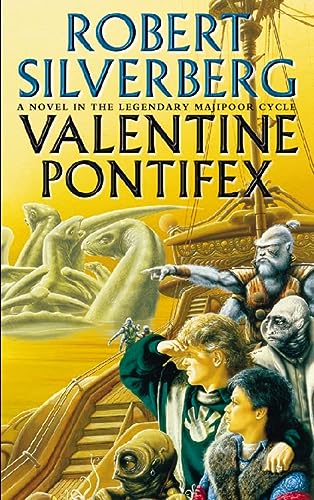 The second book in the magnificent Majipoor Cycle, the bestselling saga conceived on a truly epic scale.

The extraordinary story continues in this volume of the bestselling Majipoor Cycle that began with Lord Valentine’s Castle.

By night he dreams of imminent dangers that threaten peaceful Majipoor. By day Lord Valentine rules a world fragile in its diversity, and his deep, dark vision of treachery and wizardry make the burdens of the crown and sceptre heavy. Then he learns that the evil Shapeshifters are planning to recapture their lost world, forcing Valentine to act. He must surrender to his enemies or plunge his people into war.

The scope of its society and the detailed history Silverberg has created for this world is breathtaking. Against this, his deep, dark vision of treachery and wizardry make the burdens of the crown and sceptre heavy for Valentine and exciting for the reader.

What is the test of an SF writer? Who belongs in the highest echelons? Robert Silverberg has considerable claims to be one of the greatest practitioners in the fields of both fantasy and SF, having turned out more than 50 novels of vaunting imagination since the 1950s (as well as serious works of history and archaeology).

Silverberg has been nominated for more awards than any other science fiction writer, alive or dead. And where many of the surviving writers of that era are reduced to thin retreads of their glory days work, Silverberg's imagination is as sinewy as ever.

The first volume of his Majipoor cycle, Lord Valentine's Castle, inaugurated one of the most awe-inspiring epics in the world of fantasy fiction since Tolkien and Peake. Lord Valentine himself is a remarkable creation, ruler of the fantastic world of Majipoor, but ever fearful that the fragile peace his citizens enjoy will collapse in the face of massive evil and wizardry. Valentine is a complex and multi-faceted character, perfectly set off by a varied cast of allies and opponents.

In the second volume of the sequence, Valentine Pontifex, Silverberg extends and enriches the wonderfully detailed universe he has created for his labyrinthine tale. At night Lord Valentine is tortured by visions of the catastrophe that threatens Majipoor, and by day he attempts to negotiate the complex politics of a very diverse world. Then he learns that the sinister Shapeshifters have ambitions to recapture their lost world, and he is faced with an impossible situation: does he surrender his world to these creatures and consign his people to slavery and death, or risk a bloody war that may cost even more lives--and even risk the destruction of all of Majipoor?

Silverberg is a past master at creating the colours and wonders of his enormous planet, but his greatest achievement may be the massive humanity with which he imbues his central protagonist and those who surround him. The language is as imposing as ever:

A spasm of astonishing pain swept through him, there was a terrible droning buzz in his ears, and his breath was as hot as flame. He felt himself descending into night, a night so terrible that it obliterated all light and swept across his soul like a tide of black blood.

‘There are two things that abide: absolute awe at Silverberg’s capacity for creating images... he makes you see, believe, be there witnessing... and the overarching compassion that colours every word and all the souls in his enormous world’
Los Angeles Times

‘In terms of excellence he has few peers, if any’
Locus

Book Description Voyager, 2000. Paperback. Condition: Good. All orders are dispatched the following working day from our UK warehouse. Established in 2004, we have over 500,000 books in stock. No quibble refund if not completely satisfied. Seller Inventory # mon0004613362

Book Description Voyager, 2000. Paperback. Condition: Used; Good. **SHIPPED FROM UK** We believe you will be completely satisfied with our quick and reliable service. All orders are dispatched as swiftly as possible! Buy with confidence! Aloysius Ihezie. Seller Inventory # mon0000941364

Book Description Paperback. Condition: Very Good. The book has been read, but is in excellent condition. Pages are intact and not marred by notes or highlighting. The spine remains undamaged. Seller Inventory # GOR001697197