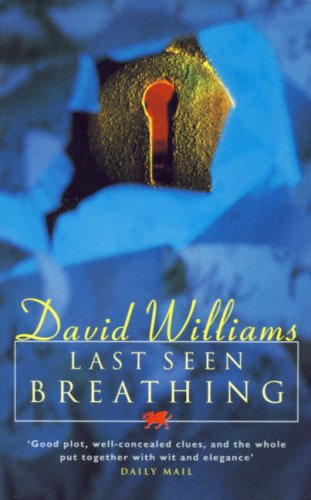 The market town of Tawrbach is deeply shocked by the accidental death of ex-actress and rich widow Rhonwen Spencer Griffith. Then her son, Elwyn dies. Inspector Merlin Parry receives evidence that suggests Elwyn was not above a bit of blackmail. Quiet Tawrbach will never be the same again.

The market town of Tawrbach is deeply shocked at the accidental death of ex-actress Rhonwen Spencer Griffith, rich widow and leading light of the Operatic Society. The strange death of her son Elwyn soon after is less remarked and it is at first assumed that he died from natural causes. But when Inspector Merlin Parry receives evidence to suggest that Elwyn was not above blackmail, he starts to have very different ideas.

‘At the sheer carpentry of detection Williams has never been more skilful’
ANTHONY LEJEUNE, 'The Tablet'

David Williams is a Welshman and was educated at Oxford, where he took a history degree. After service as a naval officer he ran a large London advertising agency before becoming a full-time writer in 1978.

Book Description HarperCollins Publishers Ltd, 1995. Paperback. Condition: Good. Connecting readers with great books since 1972. Used books may not include companion materials, some shelf wear, may contain highlighting/notes, may not include cdrom or access codes. Customer service is our top priority!. Seller Inventory # S_234921602

Book Description HarperCollins Publishers Limited, 1807. Condition: Good. New Ed. Shows some signs of wear, and may have some markings on the inside. Seller Inventory # 10914014-6

Book Description HarperCollins Publishers Ltd. Paperback. Condition: Fair. A readable copy. All pages are intact, and the cover is intact. Pages can include considerable notes-in pen or highlighter-but the notes cannot obscure the text. At ThriftBooks, our motto is: Read More, Spend Less. Seller Inventory # G0006479774I5N00

Book Description Paperback. Condition: Very Good. The book has been read, but is in excellent condition. Pages are intact and not marred by notes or highlighting. The spine remains undamaged. Seller Inventory # GOR004044835

Book Description Paperback. Condition: Good. The book has been read but remains in clean condition. All pages are intact and the cover is intact. Some minor wear to the spine. Seller Inventory # GOR002906410

Book Description Paperback. Condition: Fair. A readable copy of the book which may include some defects such as highlighting and notes. Cover and pages may be creased and show discolouration. Seller Inventory # GOR001064998

Book Description HarperCollins Publishers Ltd, 1995. Condition: Good. A+ Customer service! Satisfaction Guaranteed! Book is in Used-Good condition. Pages and cover are clean and intact. Used items may not include supplementary materials such as CDs or access codes. May show signs of minor shelf wear and contain limited notes and highlighting. Seller Inventory # 0006479774-2-4

Book Description HarperCollins, 1995. Paperback. Condition: Used; Good. **Simply Brit** Shipped with Premium postal service within 24 hours from the UK with impressive delivery time. We have dispatched from our book depository; items of good condition to over ten million satisfied customers worldwide. We are committed to providing you with reliable and efficient service at all times. Seller Inventory # mon0001521825