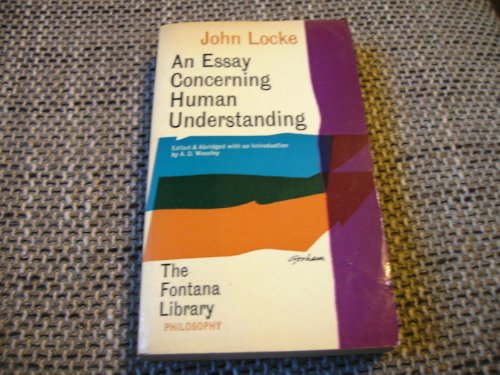 Notes and Introduction by Mark G. Spencer, Brock University, Ontario John Locke (1632-1704) was perhaps the most influential English writer of his time. His Essay concerning Human Understanding (1690) and Two Treatises of Government (1690) weighed heavily on the history of ideas in the eighteenth century, and Locke's works are often - rightly - presented as foundations of the Age of Enlightenment. Both the Essay and the Second Treatise (by far the more influential of the Two Treatises) were widely read by Locke's contemporaries and near contemporaries. His eighteenth-century readers included philosophers, historians and political theorists, but also community and political leaders, engaged laypersons, and others eager to participate in the expanding print culture of the era. His epistemological message that the mind at birth was a blank slate, waiting to be filled, complemented his political message that human beings were free and equal and had the right to create and direct the governments under which they lived. Today, Locke continues to be an accessible author. He provides food for thought to university professors and their students, but has no less to offer the general reader who is eager to enjoy the classics of world literature.

"Oxford World Classics offers yet another abridgment of Locke s Essay Concerning Human Understanding. Do we really need another? Yes, when it s as well done as
Phemister s."-Philosophy in Review

"Oxford World Classics offers yet another abridgment of Locke s Essay Concerning Human Understanding. Do we really need another? Yes, when it s as well done as Phemister s."-Philosophy in Review

JOHN LOCKE was born August 29, 1632, in Somerset, England, the son of landed English gentry. He entered Christ Church College of Oxford Univer-sity in 1652 and passed through the academic ranks quite uneventfully, later assuming a teaching post at the university. To escape ordination in the Church of England--a natural bureaucratic step toward university pro-motion--Locke took up the study of medicine and was transported into a new world of "natural philosophy" in which he associated with powerful scientific minds like that of Robert Boyle.

It was through his concern for the authority of the state in religious matters and the Natural Law used to support it that Locke became inter-ested in the role of Natural Law in experience--a curiosity that led him to philosophy, and more particularly to epistemology, as an avocation. Add to his interest in Natural Law the sociopolitical climate of seventeenth-century England--steeped in violent civil war, counter-revolution, restoration, deposition of the monarchy and the subsequent Parliamentary rule, and the eventual restoration of the monarchy late in the century--along with an intellectual stage dominated by the authoritarianism of Thomas Hobbes's Leviathan, and one can begin to sense the pressures at work on Locke. After accepting a brief diplomatic mission to Madrid in 1665, Locke retreated to his teaching and medical experiments. His real political educa-tion was to come quite by accident as a result of an association with the first Earl of Shaftesbury, a wealthy and extremely powerful figure who had survived the vicissitudes of England's political turbulence. Initially employed as the Earl's medical advisor, Locke later became a permanent member of the household. It was here under the skillful tutelage of Shaftesbury that Locke matured as a social philosopher. The political intrigues in which the Earl was engaged caused Locke to be exiled, though he later returned to England after the Glorious Revolution that saw William and Mary placed on the English throne in 1688. Locke's famous Two Treatises of Government, of which the second is most widely read, are an outgrowth of his original political proclivities, the sociopolitical chaos plaguing England during his lifetime, and his associa-tion with the Earl of Shaftesbury. Locke's dedication to individual liberty, government by consent, the social contract, and the right to revolt against governments that endanger the rights of citizens, has made him one of the most important political thinkers of the past four centuries. His legacy will live on as long as there are people fighting for freedom. He died in Oates, England, on October 28, 1704. Some of John Locke's major works include: A Letter for Toleration (1689), Two Treatises of Government (1690), An Essay Concerning Human Understanding (1693), Some Thoughts Concerning Education (1693), and The Reasonableness of Christianity (1695).

Book Description Paperback. Condition: Very Good. The book has been read, but is in excellent condition. Pages are intact and not marred by notes or highlighting. The spine remains undamaged. Seller Inventory # GOR005134759

Book Description Meridian Books. Paperback. Condition: Good. No Jacket. A copy that has been read, but remains in clean condition. All pages are intact, and the cover is intact. The spine may show signs of wear. Pages can include limited notes and highlighting, and the copy can include previous owner inscriptions. At ThriftBooks, our motto is: Read More, Spend Less. Seller Inventory # G0006410405I3N00