Items related to Voyages of Delusion: The Search for the North West...

Williams, Glyn Voyages of Delusion: The Search for the North West Passage in the Age of Reason

Voyages of Delusion: The Search for the North West Passage in the Age of Reason 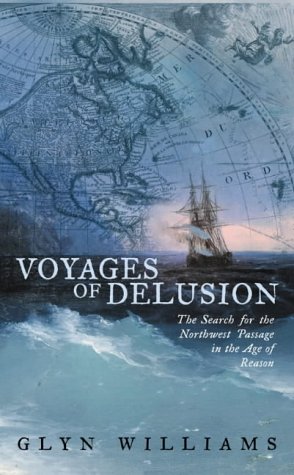 Voyages of Delusion in the Age of Reason: Williams’s book charts the 18th-century’s perilous and often fatal attempts to discover a passage through the Arctic to the Pacific. An astounding work of the history of arctic exploration.

Glyn Williams’s Prize of All the Oceans was reviewed by Patrick O’Brian: ‘A remarkably erudite and deeply informed book’. And by Andrew Roberts as ‘Staggeringly good... the best book I’ve read in ages.’

Williams’s book is set in the heat of 18th century exploration fever and charts the many perilous expeditions undertaken to find the ‘maritime philosopher’s stone’ from amongst the ice and eskimos of Hudson Bay. Fuelled by the promise of fame and riches from revitalised British trade and dominance of the North American continent, the search for this illusory passage even captivated Cook—the most pragmatic of explorers.

The book is based on extensive archival research and archaeological excavations which fuel the content of the book, rich in political and personal intrigue. Written with the narrative brilliance and the mastery of form which characterises The Prize of all the Oceans, this book promises to be both a work of historical excellence and a compelling story of daring adventure, survival and endurance at sea.

Description: xx, 467 p. : ill., maps ; 24 cm. Maps on lining papers. Includes bibliographical references (p. [431]-453) and index. Subjects: Northwest Passage --Discovery and exploration --Arctic regions. Summary: The eighteenth century--the Age of Reason--was characterized by determined attempts by philosophers, scientists, and political theorists to dispel myth, superstition, and ignorance. But the Age of Reason also witnessed some of the most irrational and vainglorious attempts by sailors and speculators to find a navigable Northwest Passage that would lead through the icy seas of the Arctic from Hudson Bay to the wealth of the Pacific Ocean. Lured by the promise of fame and riches, men endured paralyzing cold, malnutrition, and terrifying storms. Many lives and fortunes were lost in the quest for the elusive "maritime philosopher's stone." Glyn Williams describes the adventures and mishaps of these misguided expeditions.

One begins to suspect that Glyn Williams has been afflicted with the same obsessive spirit that is the hallmark of many of history's greatest explorers. He has already written seven books on voyages of discovery, and in this, his eighth, he is on more than familiar territory. Voyages of Delusion tells the story of the search for the Northwest Passage in the 18th century. In Europe this was the period of the Enlightenment, the Age of Reason, when superstition and ignorance were supposed to give way to a more rational and scientific approach. Yet, in an irony that Williams exploits to the full, it was the former that characterised the search for the Northwest Passage--the mythical trade route across the top of the North American continent. When it comes to political, personal and financial glory people tend to believe what they want to believe.

Many of those who made their bid for glory did so on little more than a wing and a prayer: maps were sketchy, non-existent or just plain wrong and the boats completely inadequate for the job. All of which is the stuff of story-telling dreams, as expeditions either got hopelessly lost, hopelessly drunk or, in some cases, failed to return at all--and Williams duly delivers. Characters, such as Christopher Middleton, whose expedition only got as far as the Churchill River, and who has hitherto only been a historical footnote, come vividly to life. By the end of the 18th century, though, reason had finally begun to hold sway as the sombre reality slowly dawned that there was no glorious, easy northern route to link the Atlantic and Pacific oceans. But Voyages of Delusion allows these early explorers some of the immortality they had hoped to achieve for themselves; their failure is Williams's success. --John Crace

1. Voyages of Delusion: The Search Northwest Passage in the Age of Reason

2. Voyages of Delusion: The Search for the North West Passage in the Age of Reason

3. Voyages of Delusion: The Search Northwest Passage in the Age of Reason [Hardcover] Williams, Glyn