Items related to Dorothy: Revelations of a Rejected Soprano

Dorothy: Revelations of a Rejected Soprano 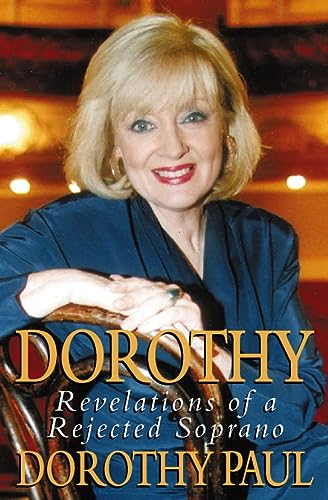 Dorothy Paul is a Scottish singing sensation. In this her witty and honest, long-awaited autobiography Dorothy’s charts her rise from the clubs of Glasgow to the glamorous heights of television fame and her own one-woman show.

An astonishing one million plus television sets were tuned into Dorothy Paul’s Hogmanay TV special last New Year’s Eve – not bad for a girl from a working-class Glasgow home whose first job was in the local cheese factory.

But Dorothy Paul has always been far from ordinary, and her talents as a singer and comedienne were quickly discovered. Her candid, warm and honest autobiography leaves nothing untold about the path to stardom.

Now at the peak of her popularity, with a huge Scottish following, Dorothy is embarking on her one-woman tour of Scotland, taking in twenty-five venues and hundreds of thousands of adoring fans.

She has been called 'a national treasure'; she has packed audiences choking with laughter wherever she has travelled with her one-woman shows. Now Dorothy Paul takes to the page with the story of her childhood in Dennistoun, her working life from the days with Kraft Cheese to the triumph of 'The Steamie' – 'She's tough and sexy – a tenement goddess with a tongue that could shift rust' – her marriage and her roller-coaster stage career.

Her nostalgia is sharply observed and never sentimental. As a reviewer of her show remarked, 'What she sends up, she never puts down.' The vivid characters familiar from her shows – ingenious father, fearsome mother, the tribe of aunts and at least two criminal teachers – are joined here by Variety stars and a galaxy of actors, so that the book is not only the history of Dorothy Paul but also a chapter in the history of the Scottish stage, and of the early days of STV.

There's much humour in the book, of course; but there is also reflection on the sources of that humour: a life in the footlights but also in the shadows. Dorothy Paul presents a selection of the many parts she has played, on stage and off; her story is touching, revealing and, ultimately, a celebration.

This is the autobiography of Dorothy Paul, the Scottish singer who rose from the clubs of Glasgow to the heights of television fame and her own one-woman show.