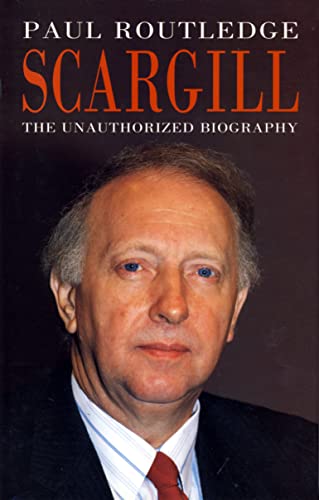 No history of post-war Britain's industrial and political troubles would be complete without discussion of Arthur Scargill. The darling of the hard Left, vilified by the right, adored by his unions, he has had a long career of controversy and has stirred passions throughout the land. Paul Routledge follows Scargill's career, from his early involvement with the Communist Party and his mysterious defection from their ranks, through to his gaining the only job he ever wanted - lifelong President of the National Union of Mineworkers. Conflict has been Scargill's raison d'etre. He is naturally antagonistic, possessing an almost unstoppable will for power, and his dialectical training found him a willing pupil. Out of confrontation would come revolution and victory for the working classes. Yet it was arguably the failure of the NUM's confrontation with the government of Margaret Thatcher during the 1984-85 coalminers' strike that marked the breaking of the working-class will to fight through strike action, and ushered in a new era of industrial peace. And behind that failure was, argues Routledge, Scargill's misplaced sense of destiny and his arrogance in dealing with fellow leaders. The book goes into the scandal of the Gadaffi-Russian money affair, the Lightman inquiry and Scargill's admission of "teeming and ladling" with NUM funds amounting to millions, of which his own executive was ignorant. It goes into Scargill's relations with politicians and his fellow miners' leaders, such as the redoubtable Mick McGahey. And it examines the nature of Scargill's rehabilitation as the era of British heavy industrial might is finally consigned to the dustbin of history.

Book Description HarperCollins, 1993. Hardcover. Condition: Very Good. Small Tears to the Dust Jacket/ Slipcase Very Good: a copy that has been read, but is in excellent condition. Pages are intact and not marred by notes or highlighting. The spine remains undamaged. Most items will be dispatched the same or the next working day. Seller Inventory # wbb0014554324

Book Description HarperCollins, 1993. Hardcover. Condition: Good. Good condition is defined as: a copy that has been read but remains in clean condition. All of the pages are intact and the cover is intact and the spine may show signs of wear. The book may have minor markings which are not specifically mentioned. Most items will be dispatched the same or the next working day. Seller Inventory # wbb0013654115

Book Description Hardback. Condition: Very Good. The book has been read, but is in excellent condition. Pages are intact and not marred by notes or highlighting. The spine remains undamaged. Seller Inventory # GOR001191775

Book Description Hardback. Condition: Good. The book has been read but remains in clean condition. All pages are intact and the cover is intact. Some minor wear to the spine. Seller Inventory # GOR001523438

Book Description HarperCollins Canada / Trade 1993-09-23, 1993. Hardcover. Condition: Good. Item is in good condition. Some moderate creases and wear. This item may not come with CDs or additional parts including access codes for textbooks. This may not have a dust jacket. Might be an ex-library copy and contain writing/highlighting. Seller Inventory # DS-0002552604-3