Items related to Blue at the Mizzen

O’Brian, Patrick Blue at the Mizzen

Blue at the Mizzen 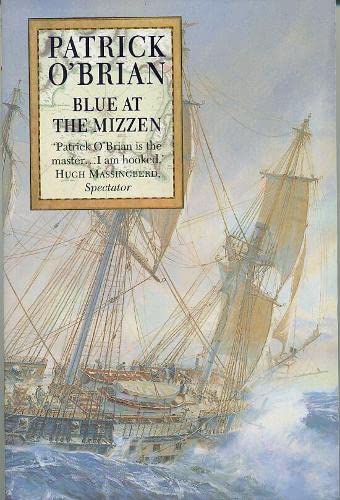 Why do the sea-faring adventure novels of Patrick O'Brian enjoy such a phenomenally devoted readership? Actually, O'Brian enthusiasts can take their pick from a variety of qualities of excellence: The sheer command of writing technique; the adroit characterisation of his heroes, every bit as rich and well-rounded as anything in serious fiction; and, of course, the bracingly-realised atmosphere of the sea on which the author sets his tales of derring-do. The latest volume, Blue at the Mizzen, represents an even greater refinement of O'Brian's art.

His long-time protagonist Jack Aubrey is about to achieve his ambition. Unusually, his finances are in good order and his professional life is ship-shape. But as he reaches the upper echelons of the Captain's list, his prospects of gaining that final promotion are in the balance. In the powder-keg revolutionary atmosphere of South America, his shipmate Stephen Maturin is coming to terms with the loss of his wife by throwing himself into the intelligence work he so enjoys. Both men become involved in a series of labyrinthine intrigues, splendidly punctuated by the action that O'Brian delivers so well. And the writing is as non-pareil as ever:

"Then came the repeated broadsides: this was not the dumb show of usual practice at divisions, but the shattering din of battle, the flashing stabs of fire, the shriek of each gun's very dangerous recoil, the heady scent of powder-smoke along the decks."

Blue at the Mizzen is a treat for lovers of O'Brian and a perfect introduction for those who have not yet read him. --Barry Forshaw Review:

I haven t read novels [in the past ten years] except for all of the Patrick O Brian series. It was, unfortunately, like tripping on heroin. I started on those books and couldn t stop.--E. O. Wilson"

Filled with exuberance and humor, and a writer's palpable delight at exercising his finest muscles. . . . At sea with a master.

O'Brian has presented his readers with a shining jewel...an intricate, multifaceted work.

I haven't read novels [in the past ten years] except for all of the Patrick O'Brian series. It was, unfortunately, like tripping on heroin. I started on those books and couldn't stop.--E. O. Wilson

1. Blue At the Mizzen Uk

Book Description HarperCollins Publishers Ltd, 1999. Hardcover. Condition: Good. Connecting readers with great books since 1972. Used books may not include companion materials, some shelf wear, may contain highlighting/notes, may not include cdrom or access codes. Customer service is our top priority!. Seller Inventory # S_251573202

2. Blue At the Mizzen Uk

3. Blue At the Mizzen Uk

Book Description HarperCollins Publishers Ltd, 1999. Condition: Good. A+ Customer service! Satisfaction Guaranteed! Book is in Used-Good condition. Pages and cover are clean and intact. Used items may not include supplementary materials such as CDs or access codes. May show signs of minor shelf wear and contain limited notes and highlighting. Seller Inventory # 0002259591-2-4

4. Blue At the Mizzen Uk

5. Blue At the Mizzen Uk

6. Blue At the Mizzen Uk

7. Blue At the Mizzen Uk

8. Blue At the Mizzen Uk

9. Blue At the Mizzen Uk

Book Description HarperCollins, 1999. Hardcover. Condition: Used; Good. Dispatched, from the UK, within 48 hours of ordering. This book is in good condition but will show signs of previous ownership. Please expect some creasing to the spine and/or minor damage to the cover. Ripped/damaged jacket. The dust jacket of this book is slightly damaged/ripped, however, this does not affect the internal condition. Seller Inventory # CHL4717239