Items related to Mog and the Baby

Kerr, Judith Mog and the Baby

Mog and the Baby 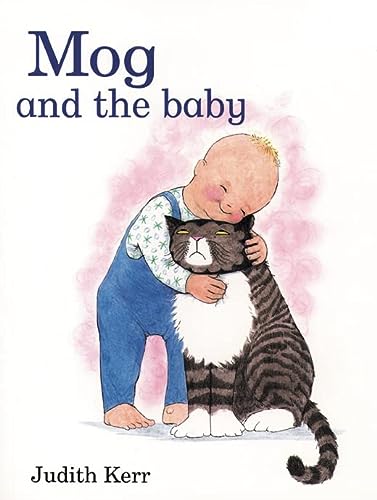 Are you sure my baby will be all right with your cat? Mrs Clutterbuck askes anxiously as she leaves her son with the Thomas family. Oh yes, Mog loves babies, Mrs Mog assures her. However, Mog sits hunched up in a corner and glowers.

`Delightful stories about the family cat with attitude.' -- The Guardian

Judith Kerr OBE was born in Berlin. Her family left Germany in 1933 to escape the rising Nazi party, and came to England. She studied at the Central School of Art and later worked as a scriptwriter for the BBC.

Judith married the celebrated screenwriter Nigel Kneale in 1954. She left the BBC to look after their two children, who inspired her first picture book, The Tiger Who Came to Tea. Published in 1968 and never out of print in the fifty years since, it has become a much-loved classic and perennial bestseller.

Judith was awarded the Booktrust Lifetime Achievement Award in 2016, and in 2019 was named Illustrator of the Year at the British Book Awards. Judith died in May 2019 at the age of 95, and her stories continue to entertain and delight generations of children.

Book Description HarperCollins Publishers Limited. Hardcover. Condition: Fair. No Jacket. A readable copy. All pages are intact, and the cover is intact. Pages can include considerable notes-in pen or highlighter-but the notes cannot obscure the text. At ThriftBooks, our motto is: Read More, Spend Less. Seller Inventory # G000183746XI5N00

Book Description HarperCollins Publishers Limited, 1996. Condition: Good. Ships from the UK. Former Library book. Shows some signs of wear, and may have some markings on the inside. Seller Inventory # 15467166-20

Book Description HarperCollins UK, 1996. Hardcover. Condition: GOOD. Has little wear to the cover and pages. Contains some markings such as highlighting and writing. Seller Inventory # 000183746X_abe_gd

Book Description Hardback. Condition: Good. The book has been read but remains in clean condition. All pages are intact and the cover is intact. Some minor wear to the spine. Seller Inventory # GOR003809596

Book Description Hardback. Condition: Very Good. The book has been read, but is in excellent condition. Pages are intact and not marred by notes or highlighting. The spine remains undamaged. Seller Inventory # GOR003105552