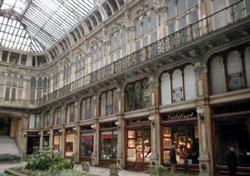 Galleria Gilibert antiquarian bookshop was opened in 1992 by the late Alfredo Gilibert, great bibliophile and collector throughout his life of all forms of art on paper. His son Massimo now owns and runs with Elena, Francesca and Fabio the bookshop and continues the family tradition of locating and providing books and prints to collectors around the world. Galleria Gilibert has been a member of L.I.L.A. since 1997. The bookshop occupies two floors in the magnificent gallery Galleria Subalpina in the heart of Turin, between two of the city's most important squares: Piazza Castello and Piazza Carlo Alberto. It is very close to the Biblioteca Reale, the famous Egyptian museum, and the Galleria Sabauda. In 2004 Gilibert antiquarian bookshop opened an annex specializing in 20th century rare books and posters at the first floor of the Galleria. The shop offers 20th c. art, literature and illustrated books, as well as books on design, cinema, architecture, and photography. There is a also a large selection of advertising posters.

Mail orders are payable by credit card or bank transfer. We ship worldwide:
shipping costs depend on book weight and dimensions.
We are responsable for shipping.

Orders usually ship within 2 business days. Shipping costs are based on books weighing 2.2 LB, or 1 KG. If your book order is heavy or oversized, we may contact you to let you know extra shipping is required.
We are responsable and insured for shipping.