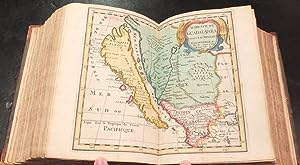 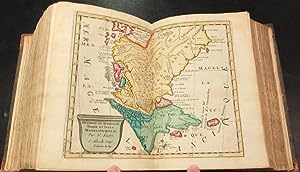 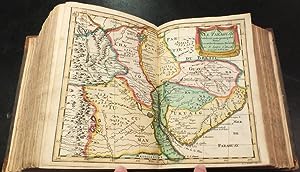 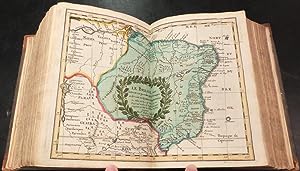 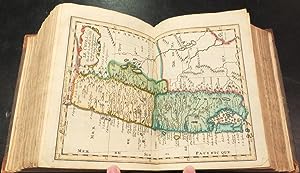 8vo., (9 x 7 Ľ inches). Hand-colored vignette title page printed in two colors, sectional title pages, hand-colored woodblock historiated initial letters, "Message to the Bookbinder" in Dutch and French at end (this copy without the double-page allegorical title page; upper half of pp. 1/2 of Bion cut away). 71 (of 74) double-page maps with hand color in full, heightened with liquid gold, 10 (of 15) plates, 8 of these folding (some pale stains). Contemporary mottled calf, the spine in six compartment separated by five raised bands, gilt lettered in one and decorated in the rest (hinges starting, gilt lettering faded, extremities worn). Provenance: Probably from the library of Andrew Dury (fl. mid-18th century), mapmaker and publisher, his widow's sale 1787. With extensive contemporary manuscript annotations throughout by Charles Skottowe, Hinsale, including the note "This book was bought at Mrs. Dury's Auction, for 101 by Chas. Skottowe Nov 8 1787" on verso of title page. With manuscript ownership inscription of "J. F. Mournan, 1st May 1887, Springmount Hallow" to sectional title page of Africa section. Freeman's, 1/21/2005, Lot 203. First edition. Pocket atlas published by François Halma, the maps reduced from Sanson's 1658 folio atlas, with Luyt's Tables Geographiques & Bion's l'Usage des Globes, featuring striking folding plates diagramming the workings of the celestial systems. Without the world map, the map of southern Germany, and the map of Madagascar. Born in Abbeville, a town in the Picardy region of France, in 1600, Sanson was the most noted French cartographer in modern history. Mapmaker to Louis XIV, King of France, Sanson endowed his maps with the most recent geographical information as well as the finest and sharpest engraving of the period. His "Cartes Generales de Toutes les Parties du Monde" was the most important single product of French commercial cartography of the seventeenth century. Sanson sparked a renaissance in geographical endeavor in his native country, which had not been a major player on the international cartographic stage since the great Oronce Finé in the sixteenth century. With this atlas, Sanson laid the foundations of French domination in map production, initiating the so-called "French school of cartography," a school that was unprecedented in its attention to precision and scientific detail and discarded much of the decorative embellishments of previous maps as irrelevant. From Sanson's time in the second half of the seventeenth century until the latter part of the eighteenth century, French geographical conceptions were more influential than those put forward by any other nation. With this landmark atlas, Sanson all but single-handedly caused the center of cartographic innovation to shift from Holland to France. Although this atlas is always listed under Nicolas Sanson, it is essentially Francois Halma's plagiarized pocket version of the Sanson atlas, reduced from Sanson's 1658 folio atlas, with the map divided into Continent groups. "François Halma was an editor, printer and publisher of theological, historical and geographical works. His output was large. He first established his business in Utrecht in 1674, then moved to Amsterdam and finally settled in Leeuwarden where he died in 1722. Among his works was an edition of Mercator's Ptolemy (1695) and a reduced-size edition of Sanson's large atlas under the new title 'Description De Tout L'Univers' [as here]" (Shirley, Printed Maps of the British Isles 1650-1750, p. 66). Koeman II, Hal1; Phillips, Atlases 528; Shirley Pastoureau, Sanson VII G. Bookseller Inventory # 72MMS353

Arader Galleries has specialized in the field of color plate books and early works on paper for over thirty years. The size and quality of our inventory is second to no other dealer. We are committed building the finest art and book collections for our clients. We would be delighted to answer any questions you may have about any of the books listed on ABE or meet you at our Galleries in New York.


We guarantee your satisfaction.