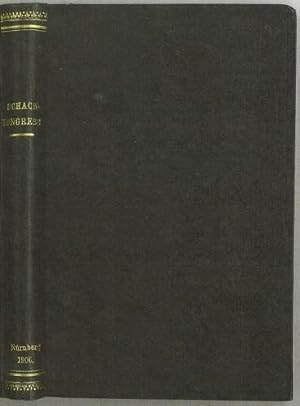 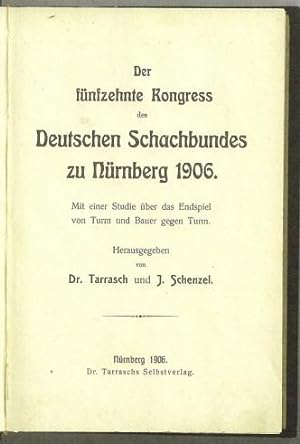 278+[1 ad] pages with diagrams and tables. Octavo (8 1/4" x 5 1/2") bound in blue cloth with gilt lettering to spine and marbled page ends. (Linde-Niemeijeriana:5278) First edition. The great Ostend tournament had scarcely ended when, ten days later, the Nuremberg Congress began. Although originally planned as a grandmaster event, the tournament failed to attract a number of the firs-rank stars - among them Lasker, Maroczy, Burn, Rubinstein, Marco and Teichmann. The reluctance of the Ostend participants to undertake the long journey to Germany's famous medieval city was understandable enough - given the great length and arduous nature of the the preceding tournament. There were, of course, other reasons keeping some players away: according to Bachmann, Maroczy and Marco were anxious to avoid meeting with Tarrasch because of "a recent press battle" with the German master. Other factors may have affected the entry list. The tournament organizers attempted a time limit experiment, but had to abandon it in the face of strong opposition. Basically, the rules imposed no limit for the first six hours of play; after that players had to make 15 moves an hour. Contestants who exceeded the time limit were assessed a penalty of one German mark per minute. Tarrasch was the most celebrated victim of this unusual arrangement. In a second-round paring against Salwe, Tarrasch not only suffered defeat, but had to pay the equivalent of "four pounds and 15 shillings" for the privilege. Others avoided such fines by agreeing "to make a number of meaningless moves," according to The Year book of Chess. The rules were abruptly changed in the face of such farcical proceedings. Afterwards there was no time limit observed except for adjourned games. Everything has its compensations, however, and the absence of some of the great names gave the new talent (Snosko-Borovski, Duras, Cohn, Wolf, Spielmann, Vidmar, etc) the chance to test their strength against their more experienced rivals. Marshall, one of the game's most colorful professionals, easily took top honors (+9 -0 +7, one and a half points of second) but found the tournament field worth of his steel: "Most of the big guns took part in tourney, so it was almost as great a triumph as at Cambridge Springs." The American champion avenged an earlier embarrassment in Nuremberg by playing imaginative attacking chess to win the 2,500 mark first prize without losing a game. Second-place finisher Duras (+8 -2 =6) distinguished himself by his astute positional play - a result already foreshadowed by his performance at Ostend. Schlechter, who along with Tarrasc, was the pre-tournament favorite, divided the thrid and fourth prizes with Fleischmann (+7 -2 =7). The Ostend winner, Schlechter, played evenly as always and would have finished hihger save for a painful loss to the tailender Janowski (+3 -11 =2!) and a costly lapse in his contest with Wolf. In a fourth-round game against his fellow Viennese, Schlechter attained a totally won rook-and-pawn ending and needed only to exercise normal care to win. Instead, he was rudely surprised when his stubbornly resisting compatriot orchestrated a clever stalemate by sacrificing his remaining Rook. Such misfortunes aside, Schlechter enjoyed the satisfaction of decisively besting Fleischmann and drawing with Marshall and Duras for a 2-1 scored against the top prize-winners. Fleischmann turned in the best performance of his career. He posted wins over Tchigorin, Vidmar, Salwe, Spielmann and Janowski and suffered by two losses gainst Schlechter and Wolf. Fifth place was Tchigorin who made a commendable showing following his disappointing failure at Ostend. Included in the Russian's point total (+8 -4 =4) against the front-runners were draws wit Marshall ad Schlechter and a victory over Duras. The out-of-form Tarrasch barely attained the last prize (+3 -4 =9), tying for the ninth through eleventh places. This unexpected weak showing was attributed to poor physical conditio. Bookseller Inventory # C0634

We are one of the American leaders of out of print chess literature. We also specialize in anthopology, Colonial America, exploration and discovery. We deal in select literature. We consign in our area of specialty and are always interested in buying quality material from single titles to entire collections. Trade offers gladly considered. We have a large selection of rare and collectable chess literature and ephemera. We are exhibitors at both the Texas book fairs in Arlington in November and Austin in January.


All subject to prior sale, returns accepted within 10 days from posted date if not as described. Payment: Master Card/Visa/Discover/AMEX or personal check.