Items related to The Wide World: True Adventures for Men 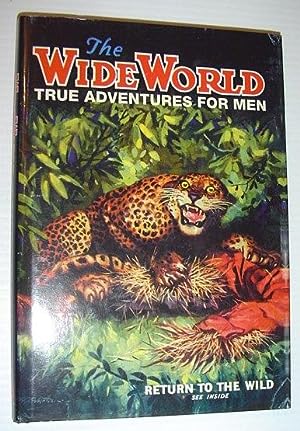 1405049316 183 pages. A compilation of great stories and illustrations from the pages of "Wide World Magazine" over the decades. "A thrilling testament to an age when men kept their upper lips stiff for a reason and the truth was more dangerous than fiction." - from dust jacket. Clean, bright and unmarked with very light wear. Price-clipped dust jacket. Nice copy. Bookseller Inventory # 431A1353

From 1898 to 1965, The Wide World was the bestselling magazine for men who craved adventure. Each issue was filled with extraordinarily eccentric, but true, tales from around the world, ranging from lion hunts and shark attacks to brigandage, club bets and survival.

There are thrilling accounts of well-documented, yet forgotten exploits, such as Sir Vivian “Bunny” Fuch’s Trans-Antarctic Expedition of 1957 and war hero Maurice Wilson’s disastrous (totally insane) solo assault on Everest in 1933. There is an endless fascination with logging, lion wrestling, and the ranking of snakes in terms of their venom. Great details emerge, such as the fact that the man who survived going over Niagara Falls in a rubber ball later died after slipping on a banana skin in New Zealand, or that a Wolf will never eat a human foot. There is even real pathos, as when we learn Maurice Wilson’s last diary entry before dying on Everest reads: “Off again. . .Gorgeous day.”

Recounted in wonderful, muscular prose (in which a wet suit is a ‘free swimming aqua-lung outfit’) and accompanied by maps, editorials, brief reports and adverts of sublime absurdity, this anthology will include the best of the magazine, presented in it's original design, with colour reproductions of its striking jackets throughout.

"A unique compendium of derring-do, survival, adventure and, as often as not, misadventure. . . hilarious." -- The Times

Perfect reading for anyone interested in adventure. A firm favourite to entertain you in front of an open fire. -- Interviewed on Radio 4 Excess Baggage 22/01/05

‘Tremendous - a hymn to the swaggering little god of anxious masculinity.’ -- Sara Wheeler, author of Terra Incognita and Travels In A Thin Country