Items related to When Genius Failed: The Rise and Fall of Long Term... 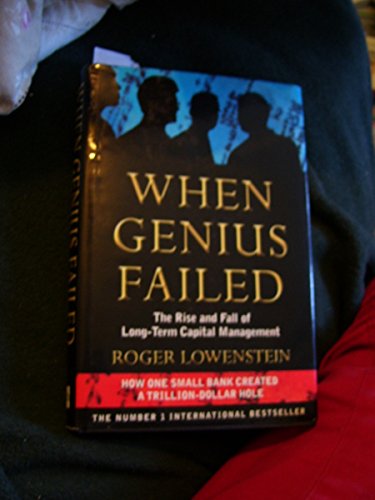 When Genius Failed: The Rise and Fall of Long Term Capital Management

This book is in very good condition and will be shipped within 24 hours of ordering. The cover may have some limited signs of wear but the pages are clean, intact and the spine remains undamaged. This book has clearly been well maintained and looked after thus far. Money back guarantee if you are not satisfied. See all our books here, order more than 1 book and get discounted shipping. Seller Inventory # 6545-9781841155036

Title: When Genius Failed: The Rise and Fall of ...

Picking up where Liar’s Poker left off (literally, in the bond dealer’s desks of Salomon Brothers) the story of Long-Term Capital Management is of a group of elite investors who believed they could, like alchmists, beat the market and create limitless wealth. In fact, they created a trillion-dollar hole in the international banking system.

Founded by John Meriweather, a notoriously confident bond dealer, along with two Nobel prize winners and a floor of Wall Street’s brightest and best, Long-Term Captial Management was from the beginning hailed as a new gold standard in investing. It was to be the hedge fund to end all other hedge funds: a discreet private investment club limited to those rich enough to pony up millions. It became the banks’ own favourite fund and from its inception achieved a run of dizzyingly spectacular returns. New investors barged each other aside to get their investment money into LTCM’s hands. But as competitors began to mimic Meriweather’s fund, he altered strategy to maintain the fund’s performance, leveraging capital with credit on a scale not fully understood and never seen before. When the markets in Indonesia, South America and Russia crashed in 1998 LCTM’s investments crashed with them and mountainous debts accumulated. The fund was in melt-down, and threatening to bring down into its trillion-dollar black hole a host of financial institutions from New York to Switzerland. It is a tale of vivid characters, overwheening ambition, and perilous drama told, in Roger Lowenstein’s hands, with brilliant style and panache.

On September 23, 1998, the boardroom of the New York Fed was a tense place. Around the table sat the heads of every major Wall Street bank, the chairman of the New York Stock Exchange, and representatives from numerous European banks, each of whom had been summoned by the Fed to discuss the highly unusual prospect of rescuing what had, until then, been the envy of them all, the extraordinarily successful bond-trading firm of Long-Term Capital Management. Roger Lowenstein's When Genius Failed is the gripping story behind the Fed's unprecedented move, the incredible heights reached by LTCM, and its eventual dramatic demise.

Lowenstein, a financial journalist and author of Buffet: The Making of an American Capitalist, uncovers and examines the personalities, academic expertise, professional relationships, and layers of numbers behind LTCM's roller-coaster ride with the precision and knowledge of a skilled surgeon. The fund's enigmatic founder, John Meriwether, spent almost 20 years at Salomon Brothers, where he formed its renowned Arbitrage Group by hiring academia's top financial economists. Though Meriwether left Salomon under a cloud of the SEC's wrath, he leapt into his next venture with ease, and enticed most of his former Salomon hires--and eventually even David Mullins, the former vice-chairman of the US Federal Reserve--to join him in starting a hedge fund that would beat all hedge funds.

LTCM began trading in February 1994, after completing a road show that, despite the Ph.D.-touting partners' lack of social skills and their disdainful condescension of potential investors who couldn't rise to their intellectual level, netted a whopping 1.25 billion dollars. The fund would seek to earn a tiny spread on thousands of trades, "as if it were vacuuming nickels that others couldn't see," in the words of one of its Nobel laureate partners, Myron Scholes. And nickels it found. In its first two years, LTCM earned 1.6 billion dollars, profits that exceeded forty percent even after the partners' hefty cuts. By the spring of 1996 it was holding $140 billion in assets. But the end was soon in sight, and Lowenstein's detailed account of each successively worse month of 1998, culminating in a disastrous August and the partners' subsequent panicked moves, is riveting.

The arbitrageur's world is a complicated one, and it might have served Lowenstein well to slow down at the start and explain in greater detail the complex terms of the more exotic species of investment flora that cram the book's pages. However, much of the intrigue of the Long-Term story lies in its dizzying pace (not to mention the dizzying amounts of money won and lost in the fund's short lifespan), and Lowenstein's smooth, conversational, but equally urgent tone carries it along well. The book is a compelling read for those who've always wondered what lay behind the Fed's controversial involvement with the LTCM hedge-fund debacle. --S. Ketchum


We guarantee the condition of every book as it's described
on the Abebooks web sites. If you're dissatisfied with your
purchase (Incorrect Book/Not as Described/Damaged) or if the
order hasn't arrived, you're eligible for a refund within 30
days of the estimated delivery date. If you've changed your
mind about a book that you've ordered, please use the Ask
bookseller a question link to contact us and we'll respond
within 2 business days.


All books will normally be shipped within 1 working day of being ordered. We provide the best shipping rates we can to each country and you can rest assured that if you are not happy with anything you receive, you have a 100% money-back guarantee with us.