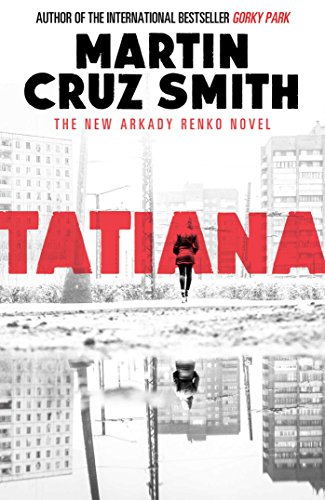 Synopsis: In his groundbreaking Gorky Park, Martin Cruz Smith created one of the iconic investigators of contemporary fiction, Arkady Renko.

In Tatiana, Smith delivers his most ambitious and politically daring novel since. When the brilliant and fearless young reporter Tatiana Petrovna falls to her death from a sixth-floor window in Moscow in the same week that notorious mob billionaire Grisha Grigorenko is shot in the back of the head, Renko finds himself on the trail of a mystery as complex and dangerous as modern Russia itself. The body of an elite government translator shows up on the sand dunes of Kalingrad: killed for nothing but a cryptic notebook filled with symbols.

A frantic hunt begins to locate and decipher this notebook. In a fast-changing and lethal race to uncover what this translator knew, and how he planned to reveal it to the world, Renko makes a startling discovery that propels him deeper into Tatiana's past - and, at the same time, paradoxically, into Russia's future.

Review: 'Muscovite Arkady Renko has long been the most persuasive of contemporary detectives...Tatiana, the eighth book in the series, is one of the most economical and polished...Cruz Smith can give us a landscape and a milieu with a crisp matter-of-factedness that poets would envy...He can make tension rise through the page like a shark's fin... The whole thing is at once grim and funny and beautifully done'Independent

'Smith made his reputation with the stunning 1981 blockbuster Gorky Park, set in Moscow with a hero, Inspector Arkady Renko, who was so gruff and drunk that he was impossible to forget. This eighth Renko novel stylishly tells the story of a female Russian investigative journalist who goes missing, and is clearly inspired by the killing of Anna Politkovskaya in 2006. Told in Smith's polished prose, it demonstrates that Smith is still capable of superb stories' Daily Mail

'Smith expertly carries on his tradition of weaving geopolitical conspiracy into gripping fiction. A decoder ring could have helped readers crack that notebook's code on their own, but struggling slowly from benighted dread into glimmering dawn of resolution is a fair reward. Figuring things out too quickly would only spoil the game' Liesl Schillinger, The Scotsman

'The fast-paced, pared-back prose is very different from the dense realism of Gorky Park. But there's no diminution in quality or excitement. Dour, sardonic Renko is always a joy to be around, and the race-against-time climax, as Renko's chess-genius ward Zhenya struggles to crack the translator's code, is expertly handled' --Guardian

Book Description Simon & Schuster UK 12/11/2013, 2013. Hardcover. Condition: Very Good. Shipped within 24 hours from our UK warehouse. Clean, undamaged book with no damage to pages and minimal wear to the cover. Spine still tight, in very good condition. Remember if you are not happy, you are covered by our 100% money back guarantee. Seller Inventory # 6545-9781849838108

Book Description Paperback. Condition: Very Good. The book has been read, but is in excellent condition. Pages are intact and not marred by notes or highlighting. The spine remains undamaged. Seller Inventory # GOR005326300

Book Description -. Hardcover. Condition: Very Good. Tatiana This book is in very good condition and will be shipped within 24 hours of ordering. The cover may have some limited signs of wear but the pages are clean, intact and the spine remains undamaged. This book has clearly been well maintained and looked after thus far. Money back guarantee if you are not satisfied. See all our books here, order more than 1 book and get discounted shipping. Seller Inventory # 7719-9781849838108

Book Description Simon & Schuster Ltd. Hardcover. Condition: Fair. A readable copy. All pages are intact, and the cover is intact. Pages can include considerable notes-in pen or highlighter-but the notes cannot obscure the text. An ex-library book and may have standard library stamps and/or stickers. At ThriftBooks, our motto is: Read More, Spend Less. Seller Inventory # G1849838100I5N10

Book Description Simon & Schuster Ltd, 2013. Hardcover. Condition: Good. Connecting readers with great books since 1972. Used books may not include companion materials, some shelf wear, may contain highlighting/notes, may not include cdrom or access codes. Customer service is our top priority!. Seller Inventory # S_273425444

Book Description Simon and Schuster UK, 2013. Hardcover. Condition: Used; Good. Ex-library **Simply Brit** Shipped with Premium postal service within 24 hours from the UK with impressive delivery time. We have dispatched from our book depository; items of good condition to over ten million satisfied customers worldwide. We are committed to providing you with reliable and efficient service at all times. Seller Inventory # 3037589

Book Description Simon & Schuster Ltd, 2013. Condition: Good. UK ed. Ships from the UK. Former Library book. Shows some signs of wear, and may have some markings on the inside. Seller Inventory # GRP75262478

Book Description Simon & Schuster Ltd, 2013. Condition: Good. UK ed. Ships from the UK. Shows some signs of wear, and may have some markings on the inside. Seller Inventory # GRP117103119

Book Description Simon & Schuster Ltd, 2013. Condition: Good. A+ Customer service! Satisfaction Guaranteed! Book is in Used-Good condition. Pages and cover are clean and intact. Used items may not include supplementary materials such as CDs or access codes. May show signs of minor shelf wear and contain limited notes and highlighting. Seller Inventory # 1849838100-2-4

There are 9 more copies of this book