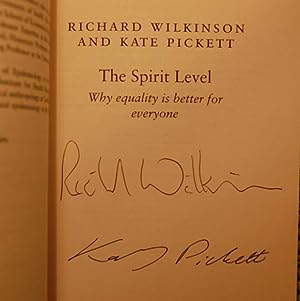 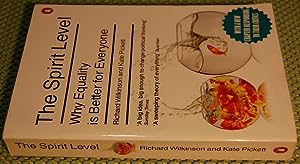 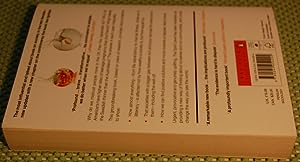 Signed by Wilkinson and Pickett on the title page. An unread near fine copy. Light shelf wear, especially at head and foot of spine. Bookseller Inventory # 000637

Richard Wilkinson and Kate Pickett's The Spirit Level: Why Equality is Better for Everyone is the most influential and talked-about book on society in the last decade - now updated with a new chapter on the controversy the book has ignited.

Why do we mistrust people more in the UK than in Japan? Why do Americans have higher rates of teenage pregnancy than the French? What makes the Swedish thinner than the Australians? The answer: inequality.

This groundbreaking book, based on years of research, provides hard evidence to show:

How almost everything - from life expectancy to mental illness, violence to illiteracy - is affected not by how wealthy a society is, but how equal it is
That societies with a bigger gap between rich and poor are bad for everyone in them - including the well-off
How we can find positive solutions and move towards a happier, fairer future

Urgent, provocative and genuinely uplifting, The Spirit Level has been heralded as providing a new way of thinking about ourselves and our communities, and could change the way you see the world.

'A remarkable new book ... the implications are profound' - Will Hutton, Observer

'The evidence is hard to dispute' - Economist

Richard Wilkinson studied economic history at the London School of Economics before training in epidemiology and is Professor Emeritus at the University of Nottingham Medical School and Honorary Professor at University College London.

Kate Pickett is a Professor of Epidemiology at the University of York and a National Institute for Health Research Career Scientist. Her work with Richard Wilkinson on The Spirit Level was shortlisted for Research Project of the Year 2009 by the Times Higher Education Supplement, and their book was chosen as one of the Top Ten Books of the Decade by the New Statesman.

'This is a book with a big idea, big enough to change political thinking' -- John Carey, Sunday Times

'what might be the most important book of the year' -- John Grace, Guardian