Items related to Are We Smart Enough To Know How Smart Animals Are?

Home de Waal, Frans Are We Smart Enough To Know How Smart Animals Are?
Stock Image 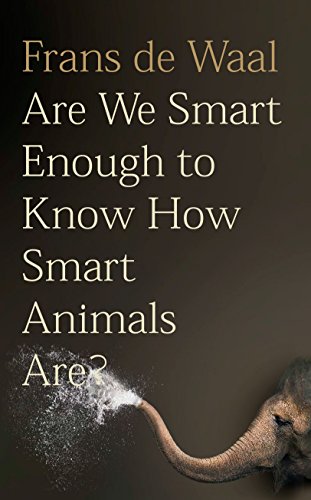 Are We Smart Enough To Know How Smart Animals Are?

Title: Are We Smart Enough To Know How Smart ...

What separates your mind from an animal's? Maybe you think it's your ability to design tools, your sense of self, or your grasp of past and future; all traits that have helped us define ourselves as the preeminent species on Earth. But in recent decades, these claims have been eroded, or disproven outright, by a revolution in the study of animal cognition. Take the way octopuses use coconut shells as tools; elephants that classify humans by age, gender, and language; or Ayumu, the young male chimpanzee at Kyoto University whose photographic memory puts that of humans to shame. Based on research involving crows, dolphins, parrots, sheep, wasps, bats, whales, and of course chimpanzees and bonobos, Frans de Waal explores the scope and the depth of animal intelligence, revealing how we have grossly underestimated their abilities. People often assume there is a cognitive ladder, from lower to higher forms, with human intelligence at the top. But what if it is more like a bush, with cognition taking different forms that are often incomparable to ours? Would you presume yourself dumber than a squirrel because you're less adept at recalling the locations of hundreds of buried acorns? Or judge your perception of your surroundings as more sophisticated than that of a echolocating bat? De Waal tells of the rise and fall of a view of animals as stimulus-reponse beings, and opens our eyes to their complex and intrricate minds. With astonishing stories of animal cognition, expert science and De Waal's deeply enquiring mind, Are We Smart Enough to Know How Smart Animals Are? challenges everything you thought you knew about animal-and human-intelligence.

'If you are at all interested in what it is to be an animal, human or otherwise, you should read this book' -- Guardian

'[This] guide to animal intelligence will help us to adjust our human-centricity a little bit... De Waal sets out not only to explore the topic of animal intelligence [...] but also to investigate why we are so very resistant to accepting the fact hat other species share some of our mental traits. In the process, he explores the history of such biases, as well as the research that has challenged them... Are We Smart Enough? is like the lunchtime lecture you might go to... story-driven and personable, so you feel the narrator is there with you, affably offering insights that expand your understanding' --Literary Review

'This is what science writing should be, and so rarely is: confident but humble; rigorous but suffused with wonder. De Waal writes with the simplicity that comes only with profound understanding. He's a true scientist - free of the reductionist fundamentalism that suffocates so much modern science. The book is an exhilarating but genial journey through evolutionary aeons, across the species barrier, and into the surprisingly companionable worlds of non-humans' -- Charles Foster, author of Being a Beast

'When a judge says that a young criminal behaved like an animal he means it as an insult. If he read Frans de Waal's splendid new book he would discover that in reality it is a compliment' -- Desmond Morris

'Compellingly recounted by De Waal, who has a long and distinguished career in animal psychology... This book makes plain [that] we can see plenty of ourselves in our animal cousins too' Raphael Hogarth, The Times

'A lively, punch and rigorous review of 20 years of academic studies of animals' mental lives, written by one of the most prominent thinkers in the field... It is the half-century-long failure of science and empathy that motivates de Waal's fascinating book... De Waal demolishes the pedestal on which we have placed humanity... Rich in detail... [it is] an important corrective to human exceptionalism' -- James McConachie, Sunday Times

'De Waal draws on his own experience and a vast array of scientific papers to support his ideas. His book is rich and digressive... It is certainly a significant contribution to the debate' -- Philip Hoare, New Statesman

'Admirable... [de Waal] offers intimate knowledge of the history of the field together with a vision of its prospects. He skilfully weaves together intellectual history, anecdote[s] about leading figures, accounts of emprical discoveries, philosophical critique, and the occasional well-aimed and perfectly weighted slap. Combining wisdom, lightly worn expertise and an undiminished capacity for wonder, de Waal is not afraid to let a shard of temper show now and again... His reflections over a long and distinguished career will enlighten the general reader... a remarkable book' -- TLS

'So, are we 'smart enough to know how smart animals are?' The question will occur to you many times as you read Frans de Waal's remarkable distillations of science in this astonishingly broad-spectrum book. I guarantee one thing: readers come away a lot smarter. As this book shows, we are here on Planet Earth with plenty of intelligent company' -- Carl Safina, author of Beyond Words: What Animals Think and Feel

'Are We Smart Enough to Know How Smart Animals Are? will completely change your perceptions of the abilities of animals. This book takes the reader on a fascinating journey of discovery into the world of animal problem solving' --Temple Grandin, author of Animals in Translation and Animals Make Us Human

We stock books about art, design, fashion, heritage/history and gender/sexuality, specialising in books about Australian, Asian & Pacific arts, crafts design and cultural history. Since we are committed to marginalised and innovative social and cultural practices, we are more likely to have books on women artists or dissident life than coffee-table books on iconic figures. This shop is in Sydney's legendary Kings Cross area, which has provided alternatives to this country's normalcy and suburbia for the last 80 years. Colloquially known as 'The Cross', this name signifies Antipodean bohemia, streetgangs and a world-famous red light district etc. THE CROSS Art + Books is a foundation member of The Bookdealers Guild (NSW).


We charge a standard rate for all Australian parcels and try to minimise the overseas freight rates. If a book is very heavy we usually include a phrase like 'This book weighs x kgs, so expect extra freight costs', in our description.