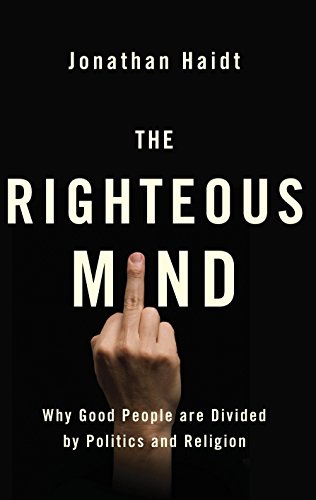 Righteous Mind: Why Good People Are Divided by Politics and Religion

Why can it sometimes feel as though half the population is living in a different moral universe from you? Why do ideas such as 'fairness' and 'freedom' mean such different things to different people? Why is it so easy to see the flaws in others' arguments, and less in our own?

Jonathan Haidt, one of the world's most influential psychologists, reveals that the reason we find it so hard to get along is because our minds are designed to be moral. Not only that, we are hardwired to be moralistic, judgemental and self-righteous too. Our intrinsic morality enabled us to form communities and create civilization, and it is the key to understanding political and religious divisions. It explains why some of us are liberal, others conservative. It is often the difference between war and peace. It is also why we are the only species that will kill for an ideal. Drawing on moral psychology, ancient philosophy, modern politics, advertising and the semantics of bumper stickers, Haidt's incredibly wise and enjoyable book examines how morality evolved; why we are predisposed to believe certain things; how our surroundings can affect our morality; and how moral values are not just about justice and fairness - for some people authority, sanctity or loyalty are more important.

Morality binds and blinds, but with new evidence from his own empirical research, Haidt shows that it is possible to liberate ourselves from the disputes that divide good people and cooperate with those whose morals differ from our own. After all, they might just have something to say.

This elegantly written book has far-reaching implications for anyone interested in politics, religion, or the many controversies that divide modern societies. If you want to know why you hold your moral beliefs and why many people disagree with you, read this book (Simon Baron-Cohen)

A remarkable and original synthesis of social psychology, political analysis, and moral reasoning that reflects the best of sciences in these fields (Edward O. Wilson)

A tour de force - a brave, brilliant, and eloquent exploration of the most important issues of our time. It will challenge the way you think about liberals and conservatives, atheism and religion, good and evil. This is the book that everyone will be talking about (Paul Bloom)

For the reader who seeks to understand happiness, my advice is: Begin with Haidt (Martin E P Seligman, professor of psychology, University of Pennsylvania)

[Haidt's] arguments are lucid and thought-provoking. They deserve to be widely read (The Sunday Times)

1. The Righteous Mind: Why Good People are Divided by Politics and Religion

Book Description Paperback. Condition: Very Good. The book has been read, but is in excellent condition. Pages are intact and not marred by notes or highlighting. The spine remains undamaged. Seller Inventory # GOR003535408

2. The Righteous Mind: Why Good People are Divided by Politics and Religion

Book Description Hardcover. Condition: Good. Ex library copy with usual stamps & stickers Good condition is defined as: a copy that has been read but remains in clean condition. All of the pages are intact and the cover is intact and the spine may show signs of wear. The book may have minor markings which are not specifically mentioned. Most items will be dispatched the same or the next working day. Seller Inventory # wbb0018548708

3. Righteous Mind: Why Good People Are Divided by Politics and Religion

Book Description Hardcover. Condition: Very Good. Item is in very good condition. If supplemental codes/CDs for textbooks are required please contact us prior to purchasing as they may be missing. Photos are stock pictures and not of the actual item. Seller Inventory # DS-1846141818-2

4. Righteous Mind: Why Good People Are Divided by Politics and Religion

Book Description Hardcover. Condition: Good. No Jacket. Item is in good condition. Some moderate creases and wear. This item may not come with CDs or additional parts including access codes for textbooks. This may not have a dust jacket. Might be an ex-library copy and contain writing/highlighting. Photos are stock pictures and not of the actual item. Seller Inventory # DS-1846141818-3

5. Righteous Mind: Why Good People Are Divided by Politics and Religion