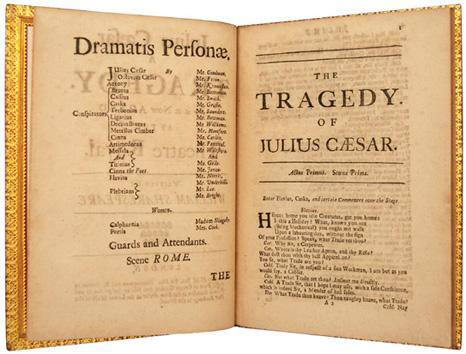 Julius Caesar. A Tragedy. As it is now Acted at the Theatre Royal. 1691

Considered the greatest writer in the English language, William Shakespeare's works are among the world's most widely read, most intensely studied, and most passionately collected. Early editions are also some of the most valuable.

While quarto editions of some of the plays and poems were published during Shakespeare's lifetime (1564 - 1616), the first collected plays did not appear until 1623, seven years after the Bard's death. Known as the First Folio, the 36 plays in Mr. William Shakespeare's Comedies, Histories, & Tragedies were compiled by John Heminges and Henry Condell, Shakespeare's fellow actors in the King's Men, the theatrical company for which he wrote. Of the estimated 750 copies originally printed, 228 are believed still in existence, although only 40 of those remain complete. Most known copies are held by institutions - the British Library holds five copies and the Folger Shakespeare Library in Washington, D.C. holds 82.

Based on some highly publicised sales since 2000, three copies of the First Folio are known to be privately owned. A copy sold in 2001 at Christie's in New York for £4.3 million, to Microsoft co-founder Paul Allen. In a private sale shortly before his death in 2003, Sir John Paul Getty purchased a First Folio from Oriel College, Oxford, for an estimated £3.5 million. And in 2006, a complete copy owned by Dr. Williams's Library in London sold to an unknown buyer at Sotheby's for £2.5 million.

Considered the Holy Grail of book collecting, finding a previously-undiscovered First Folio by happenstance, and at a bargain price, is the dream of many a collector. There are, unfortunately, no First Folios currently available on AbeBooks. But take heart - there are many other rare and beautiful editions of Shakespeare's works currently on offer, including the Second Folio (1632) and the Fourth Folio (1685), 18th–century editions edited by Nicholas Rowe and Alexander Pope, early 20th–century editions illustrated by Arthur Rackham, and much more.

By 1630, ownership of the rights to Shakespeare's plays was split among five booksellers/publishers: Robert Allot, William Aspley, John Smethwick, Richard Hawkins, and Richard Meighen. Together they published the Second Folio, printed by Thomas Cotes in five print runs, one for each publisher. Each of the print runs included personalised title page inscriptions, i.e. "Printed by Thomas Cotes for Robert Allot". The Allot copies remain the most common. Cotes also printed an 1835 edition of Pericles, one of seven plays not included in either the First or Second Folios. 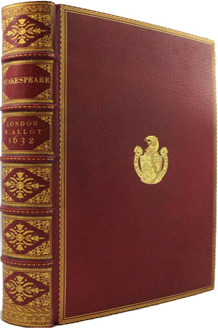 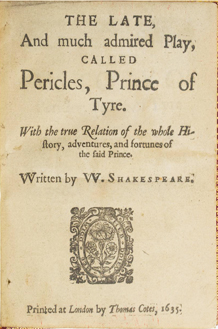 The Late, And much admired Play, called Pericles, Prince of Tyre

The Fourth Folio, published in 1685 by H. Herringman, E. Brewster, R. Chiswell and R. Bentley, includes seven plays that did not appear in the First or Second Folios. Those seven plays are: Pericles, Prince of Tyre; Locrine; The London Prodigal; The Puritan; Sir John Oldcastle; Thomas Lord Cromwell; and A Yorkshire Tragedy. 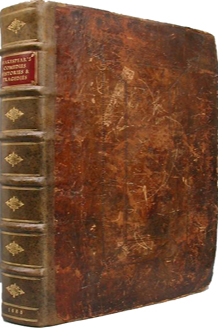 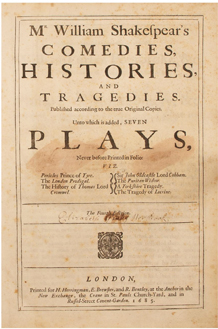 Title page from the Fourth Folio 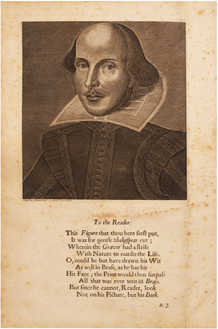 Shakespeare's Portrait from the Fourth Folio, including Ben Jonson's poem 'To the Reader'

After buying the rights from the heirs of the Fourth Folio's publishers, London bookseller and publisher Jacob Tonson published several editions of Shakespeare's works in the 18th–century, including multi-volume sets that are considered the beginning of Shakespearean scholarship, especially those edited by Nicholas Rowe (1709), Alexander Pope (1725), and Lewis Theobald (1733). 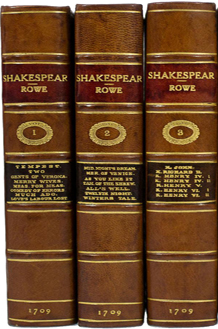 The Works of Mr. William Shakespear in Six Volumes edited by Nicholas Rowe 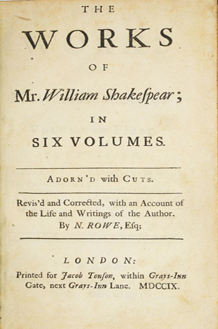 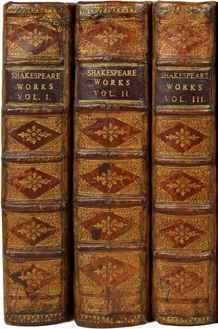 The Works of Mr. William Shakespear in Six Volumes edited by Alexander Pope 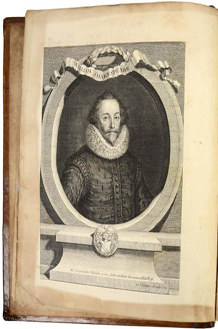 Shakespeare's Portrait from the Pope Edition 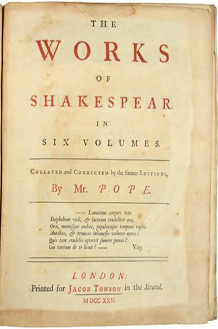 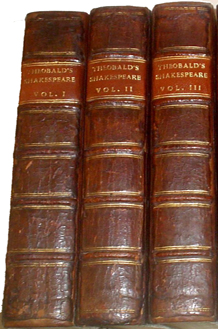 The Works of Mr. William Shakespeare in Seven Volumes edited by Lewis Theobald 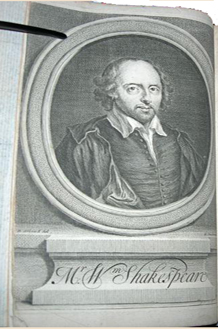 Shakespeare's Portrait from the Theobald Edition 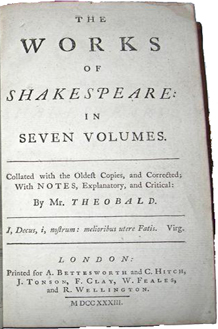 Bernard Lintott, who sold books in St. Martin's Lane, London, published several editions of Shakespeare's poetry in the early 18th–century. In 1718, he made an agreement with Tonson to share publication of any plays published by either house, including those of Shakespeare. Together they went on to publish a re-issue of the Rowe edition in nine volumes (1747) and a re-issue of the Theobald edition in eight volumes (1757). 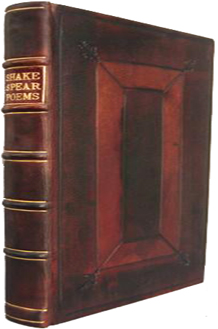 A Collection of Poems, in Two Volumes; Being all the Miscellanies of Mr. William Shakespeare 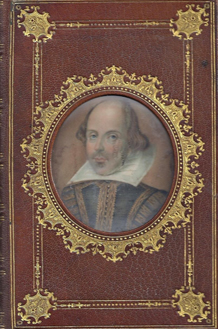 A Collection of Poems, Viz I Venus and Adonis, II the Rape of Lucrece, III the Passionate Pilgrim, IV Sonnets to Sundry Notes of Musick 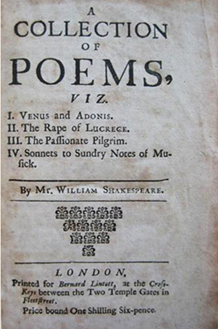 A Collection of Poems Title Page

Noted illustrator Arthur Rackham provided the artwork for two of Shakespeare's plays published in the early 20th–century. The first Rackham-illustrated edition of A Midsummer Night's Dream was published in 1908 and included 40 colour plates. The Tempest, published in 1926, included 20 colour plates. Later editions of both were also published but in some the illustrations were reproduced in black and white (read descriptions carefully). The last edition of A Midsummer Night's Dream published during Rackham's lifetime was from the Limited Editions Club, published in 1939, and included six full colour plates. Rackham also provided illustrations for two editions of Charles and Mary Lamb's Tales from Shakespeare, one in 1899 and another in 1909. Originally published in 1807, the tales are reworkings of selected plays using language and plots simplified to appeal to children. 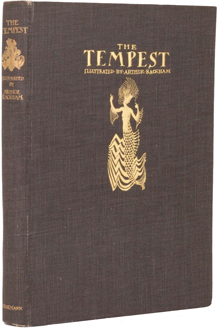 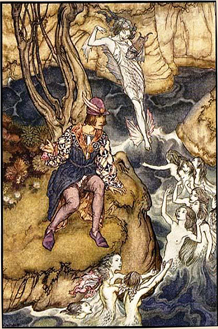 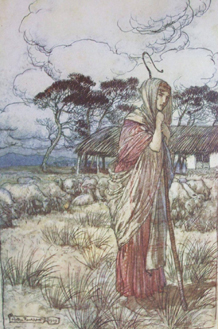 In the 20th–century, specialty publishers like the Folio Society, the Limited Editions Club, the Franklin Library, and Easton Press began issuing collectable editions of Shakespeare's works. Both the Limited Editions Club and Easton Press published sets of the complete works. Often in high quality cloth or leather bindings, many of these collector's editions are also illustrated by well known artists, such as Salvador Dali, W. Heath Robinson, and Oliver Messel. And while some copies can be quite expensive, others are often very affordable. 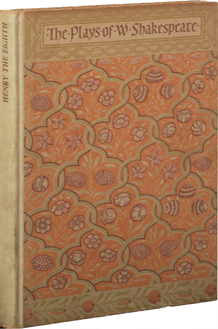 The Plays of William Shakespeare 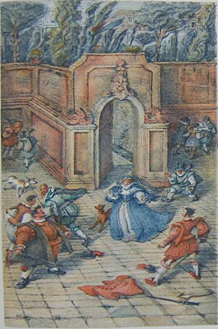 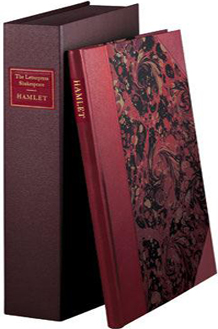 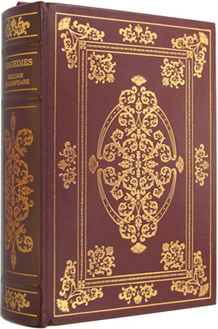 The Greatest Tragedies of William Shakespeare 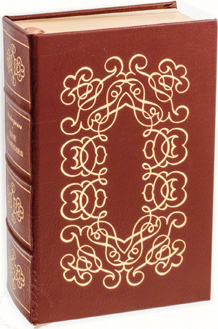 The Comedies of William Shakespeare 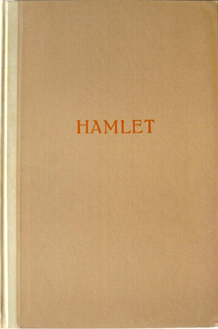 3. The Letterpress Shakespeare - 28 2-volume sets - £5,740
Collection of 28 of Shakespeare's works, each work accompanied by a companion volume of commentary. Published by the Folio Society.

5. The Tragedie of Hamlet, Prince of Denmark - £4,467
Limited, numbered edition of Hamlet, published in English in 1930 by Weimar Cranach Press. Illustrated by Edward Gordon Craig. This is the English version of the book that appears as number 2 in this list.

Watch: Why is Shakespeare's First Folio so important?