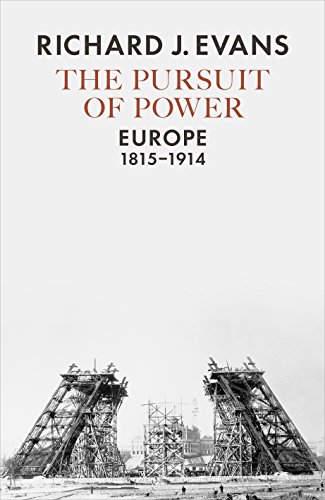 The Pursuit of Power

ECONOMIST BOOKS OF THE YEAR 2016

'A scintillating, encyclopaedic history, rich in detail from the arcane to the familiar... a veritable tour de force' Richard Overy, New Statesman

'Transnational history at its finest ... .. social, political and cultural themes swirl together in one great canvas of immense detail and beauty' Gerard DeGroot, The Times

A masterpiece which brings to life an extraordinarly turbulent and dramatic era of revolutionary change.

The Pursuit of Power draws on a lifetime of thinking about nineteenth-century Europe to create an extraordinarily rich, surprising and entertaining panorama of a continent undergoing drastic transformation. The book aims to reignite the sense of wonder that permeated this remarkable era, as rulers and ruled navigated overwhelming cultural, political and technological changes. It was a time where what was seen as modern with amazing speed appeared old-fashioned, where huge cities sprang up in a generation, new European countries were created and where, for the first time, humans could communicate almost instantly over thousands of miles. In the period bounded by the Battle of Waterloo and the outbreak of World War I, Europe dominated the rest of the world as never before or since: this book breaks new ground by showing how the continent shaped, and was shaped by, its interactions with other parts of the globe.

Richard Evans explores fully the revolutions, empire-building and wars that marked the nineteenth century, but the book is about so much more, whether it is illness, serfdom, religion or philosophy. The Pursuit of Power is a work by a historian at the height of his powers: essential for anyone trying to understand Europe, then or now.

Review: Highly impressive ... chronicles a turbulent and confusing century with wonderful clarity and verve ... transnational history at its finest ... more complete but also much more fascinating than most histories of the period (Gerard Degroot The Times)

Splendid ... a traditional framework, perhaps, but one whose enduring value is confirmed by Evans's fine scholarship (David Bell Financial Times)

Dazzlingly erudite and entertaining ... He brings together an almost impossibly vast range of material (bear-hunting in Hungary, trade unions in Dorset, the wars of Italian unification) in a sweeping narrative underpinned by a persuasive central theme ... he handles his immense body of material with enviable subtlety and skill. (Dominic Sandbrook The Sunday Times)

This is a scintillating, encyclopaedic history, rich in detail from the arcane to the familiar. The canvas is vast and so much is now known about the period, thanks to a profusion of historical writing, that giving shape to the material must have been a daunting task. Yet Evans has risen to the challenge splendidly. The Pursuit of Power mixes political, social, economic, cultural and intellectual history to give a richness of texture and presence that the existing major accounts of the century - many of them written at a time when high politics, great men and balance-of-power diplomacy were what counted as history - were unable to deliver. To achieve that blend and yet retain coherence marks this volume as a veritable tour de force... for anyone who wants to discover just how entangled Europe's history is, there can be no better starting point than The Pursuit of Power. (Richard Overy New Statesman)

The Pursuit of Power offers both a compelling big picture and a flavour of the time. Evans conveys the era's "strangeness and familiarity", revealing the many faces of a much-misunderstood century whose imperialism and revolutions remain influential. The last line of "Recessional" is ubiquitous, but its warning about the transience of power and the dangers of ignorance illustrates the timeliness of Evans's work: "Lest we forget." (Christopher Kissane Guardian)

Book Description Allen Lane, 2016. Hardcover. Condition: Good. A few small marks to page edges Good condition is defined as: a copy that has been read but remains in clean condition. All of the pages are intact and the cover is intact and the spine may show signs of wear. The book may have minor markings which are not specifically mentioned. Most items will be dispatched the same or the next working day. Seller Inventory # wbb0016698503

2. The Pursuit of Power

3. The Pursuit of Power

Book Description Allen Lane, 2016. Condition: Good. A+ Customer service! Satisfaction Guaranteed! Book is in Used-Good condition. Pages and cover are clean and intact. Used items may not include supplementary materials such as CDs or access codes. May show signs of minor shelf wear and contain limited notes and highlighting. Seller Inventory # 0713990880-2-4

4. The Pursuit of Power