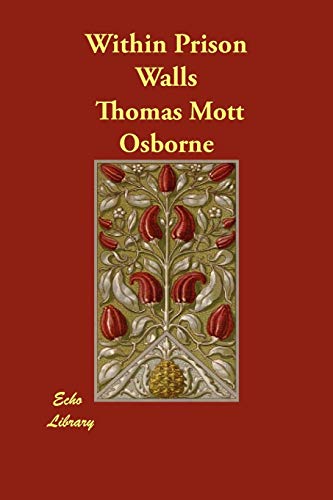 Synopsis: Being A Narrative Of Personal Experience During A Week Of Voluntary Confinement In The State Prison At Auburn, New York. First published in 1914.

About the Author: Thomas Mott Osborne (September 23, 1859 – October 20, 1926) was an American prison administrator, prison reformer, industrialist and New York State political reformer. He was also known as "Tom Brown," a name he gave himself when he spent a week in the Auburn State Prison in New York state in 1913. In an assessment of Osborne's life, a New York Times book reviewer wrote: "His career as a penologist was short, but in the interval of the few years he served he succeeded in revolutionizing American prison reform, if not always in fact, then in awakening responsibility.... He was made of the spectacular stuff of martyrs, to many people perhaps ridiculous, but to those whose lives his theories most closely touched, inspiring and often godlike."