Items related to Peace and War: A Collection of Poems

Home Peace and War: A Collection of Poems
Stock Image 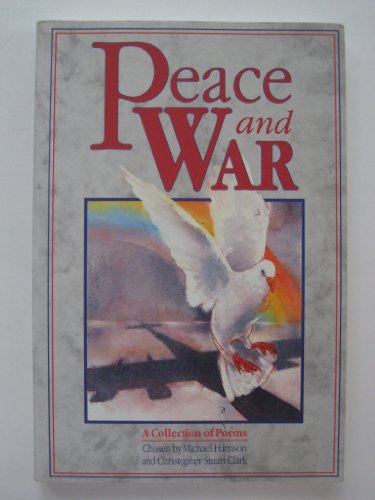 Ex-Library Book. Has usual library markings and stamps inside. All orders are dispatched the following working day from our UK warehouse. Established in 2004, we have over 500,000 books in stock. No quibble refund if not completely satisfied. Seller Inventory # mon0004329127

Title: Peace and War: A Collection of Poems

This anthology of nearly 200 poems chronicles the many voices of peace and war from ancient Greece and Rome, through the Bible, to the dropping of the atomic bomb, the wars in Korea and Vietnam, the uneasiness of the present and the uncertainty of the future. It includes works from China, Russia, Korea, Hungary, Australia, Poland, Zululand, America and England, from poets ranging from Aeschylus, Milton, Blake, Shakespeare, Wilfred Owen, Robert Frost, Rupert Brooke, Walt Whitman and Siegfried Sassoon to Laurie Lee, Dannie Abse, Carl Sandberg, Charles Causley and Ted Hughes.

Michael Harrison and Christopher Stuart-Clark have collaborated on several books for Oxford, including the new Oxford Book of Story Poems.

We are a family run online bookshop based in Wales at the western edge of the Brecon Beacons National park and have been selling books online since October 2004. I have always had a love of books and it eventually got to the stage where my own book collection began to take over the family home! I reluctantly decided to sell a few of my own books on Amazon and was astonished at how quickly they sold. I was hooked and decided to start buying and selling books as a small part-time business from my spare bedroom. The business rapidly expanded, taking over the spare bedroom and my garage, swiftly followed by a spare bedroom in my mother's house and her garage! I acquired a small industrial unit in February 2007 and took the plunge to go full-time in March 2007, closely followed by my wife in September 2007. In October 2007 we moved in to larger premises and also took on our first members of staff to assist with the ever increasing workload. Our aim is to ensure that the people who buy our books enjoy the same service that we would hope for when purchasing a book ourselves. To that end, we endeavour to give all our books accurate descriptions, price them accordingly and dispatch swiftly and safely. All orders are dispatched within one working day, Monday to Friday. We will endeavour to answer all queries by email within 24 hours.


All orders are shiped within 1 working day. We offer a no quibble returns service. If you would like to return your item for any reason please email us in the first instance within 7 days of receipt. If there is a fault with your item that is not described in the listing, you may return your item for a refund within 30 days of purchase. All returns must be returned in their original packaging.