Items related to Modern Man in Search of a Soul 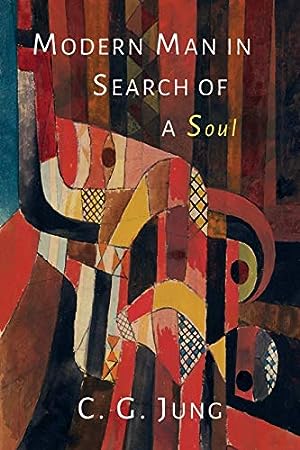 Modern Man in Search of a Soul

100% Customer Satisfaction Guaranteed ! The book shows some signs of wear from use but is a good readable copy. Cover in excellent condition. Binding tight. Pages in great shape, no tears. Not contain access codes, cd, DVD. Seller Inventory # MBSG1684220904

Title: Modern Man in Search of a Soul

2017 Reprint of 1933 U.S. Edition.  Full facsimile of the original edition, not reproduced with Optical Recognition software.   Considered by many to be one of the most important books in the field of psychology, Modern Man in Search of a Soul is a comprehensive introduction to the thought of Carl Gustav Jung.  The writing covers a broad array of subjects such as gnosticism, theosophy, Eastern philosophy and spirituality in general. The first part of the book deals with dream analysis in its practical application, the problems and aims of modern psychotherapy, and also his own theory of psychological types. The middle section addresses Jung's beliefs about the stages of life and Archaic man. He also contrasts his own theories with those of Sigmund Freud.  In the latter parts of the book Jung discusses psychology and literature and devotes a chapter to the basic postulates of analytical psychology. The last two chapters are devoted to the spiritual problem of modern man in aftermath of World War I.  He compares it to the flowering of gnosticism in the 2nd century and investigates how psychotherapists are like the clergy.

'He was more than a psychological or scientific phenomenon; he was to my mind one of the greatest religious phenomena the world has ever experienced.' - Laurens van der Post 'His psychological approach is deeply interesting and should stimulate many who are today more ready to trust a doctor than a clergyman, to help them to rediscover the meaning of life.' - The Guardian 'Jung was the first to see that, of all the crises facing humanity, the lack of any sense of meaning in life is the crisis that guarantees all the rest. Whether the reader self-defines as modern, late modern of post-modern, the predicament that Jung lays out in bleak detail still strikes a chord. His suggestion that any possible solutions - political ecological, philosophical or religious - must include and respect elements of what lies deep within the psyche ('the soul') continues to challenge and to inspire.' - Andrew Samuels, Professor of Analytical Psychology, University of Essex 'This slim volume contains the quintessence of Jung's thinking. Originally published in 1933, it was the first readily accessible presentation in English of the great psychologist's basic ideas about psychotherapy, dream interpretation, psychological types, the stages of life and his differences with Sigmund Freud. His observations on the relationship between the "archaic man" and "modern man" anticipate those of contemporary evolutionary psychiatry, while his diagnosis of what alls western culture has been endorsed by subsequent history. An invaluable book for those seeking an introduction to Jungian psychology, expressed - with unusual clarity - in the master's own words.' - Anthony Stevens