Items related to Lost Farms of Brinscall Moors: The Lives of Lancashire... 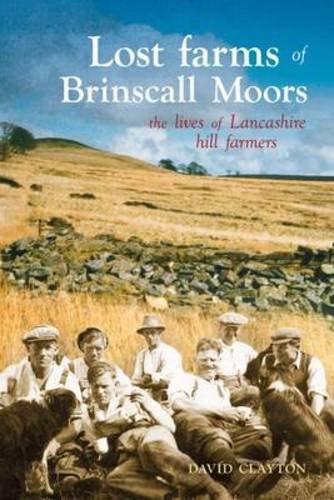 New copy - Usually dispatched within 4 working days. A unique and engaging book about the farms and farming communities of Brinscall near Chorley, Lancashire, that were broken apart in the name of progress. It takes the reader back in time, on a journey into the forgotten lives of Lancashire's lost hill-farming communities. Seller Inventory # B9781874181767

Title: Lost Farms of Brinscall Moors: The Lives of ...

...scattered heaps of stone, so thoroughly collapsed but still so numerous, mysterious & challenging ...This unique and engaging book takes the reader back in time, on a journey into the forgotten lives of Lancashire's lost hill-farming communities. In the space of little more than five square miles, there used to be nearly fifty farms, upon which hundreds of men, women and children depended. Then, almost overnight, the march of 'progress' robbed them of their homes and livelihoods, leaving behind a landscape frozen in time, with crumbling buildings and lonely vestiges of human habitation. Local author David Clayton has located all the remains of the old farmsteads that were the beating heart of life and work for generations of farming folk, and he reveals why it all ended so suddenly. Skilfully combining his intimate knowledge of all of the farms and most of the families with testimony from surviving diaries and other documents, he paints an intriguing, often poignant, picture of a way of life that now exists only as a memory. Presented in the form of a gentle tour that can be undertaken either from the comfort of an armchair or by wandering around the ruins, Lost farms of Brinscall Moors is a journey of exploration and discovery that will appeal to anyone interested in the history of both the local area and the county of Lancashire.

Born in Horwich, and a graduate of Merton College, Oxford, G.D. (David) Clayton, as Senior History Master of Burnley Grammar School, published a significant international work on 19th century international relations - Britain and the Eastern Question:Missolonghi to Gallipoli (Hodder and Stoughton) in 1971. Following a career including 8 years as Deputy Head and 17 years as Headmaster in Burnley, he has more recently turned his attention to local history, publishing a celebratory assessment of post-1944 Act grammar school's early years - The Hayward Grammar School, Bolton: the first decade 1955-1965 (Phillimore) in 2008. President of the Bolton branch of the Historical Association since 1987, and a resident in the Lancashire village of Brinscall since 1965 he began in 2009 to explore the reasons why there are so many ruined farmhouses on the nearby moor. Why and when were the farms built, and why and when did they fall empty? Why were they previously demolished? Who had previously lived there and why? As usual, events do have causes, in local as in national and international affairs. A fascinating story emerges in Brinscall - not only of irresistible economic change but also of positive achievement, triumph over adversity, and sadness mingled with success.

The Saint Bookstore has a range of over 1 million titles available.


Please order through the Abebooks checkout. We only take orders through Abebooks - We don't take direct orders by email or phone.

Refunds or Returns: A full refund of the purchase price will be given if returned within 30 days in undamaged condition.

As a seller on abebooks we adhere to the terms explained at http://www.abebooks.co.uk/docs/HelpCentral/buyerIndex.shtml - if you require further assistance please email us at orders@thesaintbookstore.co.uk


Most orders usually ship within 1-3 business days, but some can take up to 7 days.