Items related to Londongrad: From Russia with Cash;The Inside Story...

Home Lansley, Stewart Londongrad: From Russia with Cash;The Inside Story of the ...
Stock Image 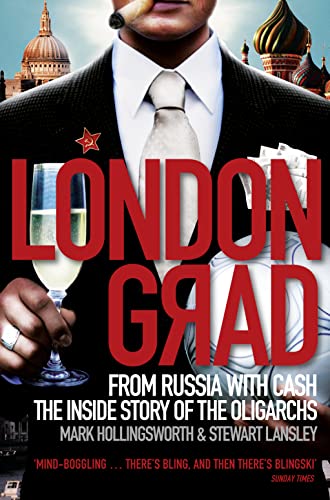 Londongrad: From Russia with Cash;The Inside Story of the Oligarchs

The book has been read but remains in clean condition. All pages are intact and the cover is intact. Some minor wear to the spine. Seller Inventory # GOR002405396

Title: Londongrad: From Russia with Cash;The Inside...

A group of buccaneering Russian oligarchs made colossal fortunes after the collapse of communism – and many of them came to London to enjoy their new-found wealth. Londongrad tells for the first time the true story of their journeys from Moscow and St Petersburg to mansions in Mayfair, Knightsbridge and Surrey – and takes you into a shimmering world of audacious multi-billion pound deals, outrageous spending and rancorous feuds.

But while London's flashiest restaurants echoed to Russian laughter and Bond Street shop-owners totted up their profits, darker events also played themselves out. The killing of ex-KGB man Alexander Litvinenko in London to the death – in a helicopter crash he all but predicted – of Stephen Curtis, the lawyer to many of Britain's richest Russians, chilled London's Russians and many of those who know them.

This is the story of how Russia's wealth was harvested and brought to London – some of it spent by Roman Abramovich on his beloved Chelsea Football Club, some of it spent by Boris Berezovsky in his battles with Russia's all-powerful Vladimir Putin. Londongrad is a must-read for anyone interested in how vast wealth is created, the luxury it can buy and the power and intrigue it produces.

‘A magnificently emetic account of the lifestyles of the Russki oligarchs...’ Rod Liddle, Sunday Times

“A gripping chronicle of the decadence, danger and sheer power that defined a phenomenon... thoroughly researched... a compelling read” - Jeremy Hazlehurst, City AM

“a racy and alarming investigation” - the Economist

In 2002, World of Books Group was founded on an ethos to do good, protect the planet and support charities by enabling more goods to be reused. Since then, we've grown into to a global company pioneering the circular economy. Today, we drive the circular economy through three re-commerce brands: - Wob: Through Wob, we sell. We provide affordable, preloved books and media to customers all over the world. A book leaves our collection of over seven million titles and begins a new chapter every two seconds, enabling more goods to be reused. - Ziffit: Through Ziffit, we buy. We give people around the world the opportunity to contribute to the circular economy, earn money and protect the planet, by trading their unwanted books and media. - Shopiago: Through Shopiago, we help others. By sharing the technology that has grown World of Books Group into the business it is today, we?re helping charities increase revenue and reduce waste through re-commerce.


WorldofBooks.com fully embraces the AbeBooks terms and conditions and we will do
what we can to resolve any issues.