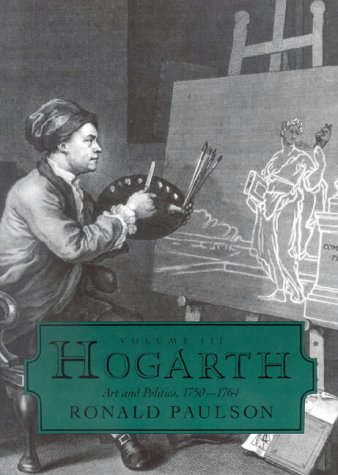 This final volume of Paulson's magnificent biography takes Hogarth from his fifty-third year to his death at sixty-seven. The period opens with Hogarth at the height of his powers; a figure of influence with the literary generation of Richardson and Fielding, he was known to an unprecedented spectrum of English men and women. At this point, Hogarth chose to philosophise about art, extending his successful practice in aesthetic theory, in The Analysis of Beauty, partly in reaction to the agitation for an art academy based on the French model, partly out of the conviction that his art required verbal validation, and partly (some contemporaries felt) out of hubris. And at the same moment, the hard won fabric of his reputation began to unravel. A new generation had arisen, some friendly and interested in building on Hogarth's achievement, but some determined to supersede what seemed to be, in England of the 1750s, too insular a figure to represent English art and culture to the world. The consequences - given his own doggedness and the shifting allegiances of former friends - were tumultuous and darkened the last years of Hogarth's life, pushing him to extremes of theory, practise and self-justification. For the first time in his career he found himself apparently out of step with his times. Although these cannot be called happy years, they elicited form Hogarth some of his most brilliant and audacious works, in writing as well as painting and engraving. In many ways he had already, by 1750, anticipated the Reynold's generation pointing the way into the Promised Land, but disagreeing over the nature of that promise. More than the earlier two volumes, Art and Politics focuses on the reception of Hogarth and his works. The paranoid strain in Hogarth responded to the notion of being attacked; and this also reflected his increasing fear of the general audience he had himself helped to create as no longer a public but a crowd.

"No one working in any field that Hogarth touched can afford not to begin with Paulson's splendid book." Times Literary Supplement "Beyond question, Professor Paulson's commentary will remain the most influential well into the next century." The Sunday Telegraph "To say that Paulson writes with authority would be an understatement; when it comes to Hogarth, Paulson is authority." The Spectator "This is the definitive work and, barring almost inconceivable future scholarly finds, will remain the definitive work." Art in America "Truly indispensable." Studies in English Literature "Paulson's new trilogy is a substantial and brilliant revision of his original masterpiece." Linda Colley, The Observer "Paulson's study is densely packed with well-researched facts, and he evokes a strong sense of period and of the cultural milieu of London during the first part of the eighteenth century ... Hogarth reused props in different pictures. Paulson is excellent when describing these props and their significance." Literary Review "These very thoroughly researched books give us as much understanding of society, politics and life in England in the first half of the 18th century as they do about Hogarth... Presented in a well-organised way, and with a firm grasp of the balance that must be found between the literary and pictorial content of Hogarth's art." The Art Book Review


If any part of your order is faulty, please phone or email us the details and we will arrange for either a replacement or a refund to your account.
If you are not satisfied with your books, please return them within 15 days of receipt to the address above, and we will send a full refund or replacement.