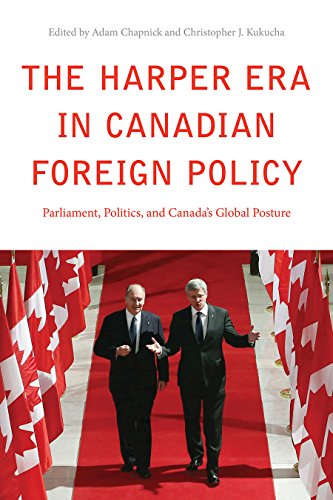 In 2015 the Harper era in Canadian foreign policy was over, suggesting a return to the priorities of a gentler, more cooperative Liberal governments. But was the Harper era really so different? And if so, why? This comprehensive analysis of Canada’s foreign policy during this era addresses these very questions. The chapters, written by leading scholars and analysts of Canadian politics, provide an excellent overview of foreign policy in a number of different policy areas. They also come to a surprising conclusion as to whether the transition from a minority to majority government in 2011 shaped the way the Harper Conservatives conceived of, developed, and implemented international policy.

Review: The Harper Era is an important first look at nearly a decade of Canadian foreign policy that will likely, and deservedly, be the standard work on foreign policy in this period, just as Nelson Michaud and Kim Richard Nossal’s Diplomatic Departures is the principle book on Brian Mulroney’s handling of foreign affairs. Until the archives have opened, 30 years hence, persons interested in this controversial and complicated period in Canadian foreign policy would be well advised to consult this collection. Author: Asa McKercher, McMaster University Source: International Journal, Vol. 72 No. 1, March 2017

Adam Chapnick and Christopher Kukucha [present] a more nuanced reality [of Harper’s foreign policy]: that while there was an impulse on Harper’s part to deviate from the norm, external and systemic factors, like the Canadian economy, American policy and the dynamics of the international community, ensured that Canada’s foreign policy under Harper wasn’t as much of an aberration as some might think. Author: Catherine Tsalikis Source: opencanada.org, January 2017

Book Description UBC Press, 2016. Condition: Good. A+ Customer service! Satisfaction Guaranteed! Book is in Used-Good condition. Pages and cover are clean and intact. Used items may not include supplementary materials such as CDs or access codes. May show signs of minor shelf wear and contain limited notes and highlighting. Seller Inventory # 077483319X-2-4