Items related to Harlequin Unmasked, The Commedia dell'Arte and... 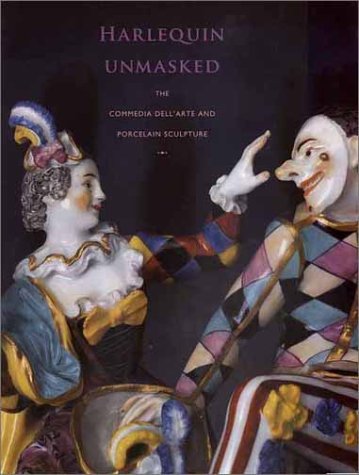 The commedia dell'arte began in Italy as irreverent, improvised street theatre and is best known for its exuberant characters, specifically Harlequin, Pantalone, Pulcinella, Scaramouche, and Colombine, among others. Since the sixteenth century, these personalities have inspired paintings, engravings, and porcelain sculptures. Encompassing theatre, court culture, masquerades, and the decorative arts, this splendidly illustrated and engaging book offers original perspectives on porcelain commedia figures while also making an important contribution to the study of the commedia dell'arte. The volume focuses on nearly 150 porcelain sculptures as it tells the story of the commedia dell'arte's transformation into sculpture. Why were the figures made? Why do they appear as they do? What inspired their gestures and costumes? How did street-theatre themes become integrated into court life and entertainment? Examining these delightful porcelain figures in greater breadth and detail than ever before, this book is essential for those interested in theatre, painting, costume, and the decorative arts. This catalogue accompanies an exhibition at the Gardiner Museum of Ceramic Art, Toronto, from 21st September 2001 to 20th January 2002.

Meredith Chilton is curator, the Gardiner Museum of Ceramic Art, Toronto. Domenico Pietropaolo is director, Graduate Centre for the Study of Drama, University of Toronto.


Listed titles of fiction are First Editions unless otherwise noted. All titles
are hard cover editions, unless specifically stated. ALL ITEMS SUBJECT TO PRIOR
SALE. Payment must accompany order.
Return Policy: All books are returnable within seven days, if returned in the
same condition as sent. E-mail notice to dealer is required prior to shipping
any returns.
Shipping Policy: Standard shipping fees are $5.00(US)for the first book, $1.00
for each additional item. Books sent media mail unless ot...


Orders usually ship within 3 business days. Shipping costs are based on books weighing 2.2 LB, or 1 KG. If your book order is heavy or oversized, we may contact you to let you know extra shipping is required.