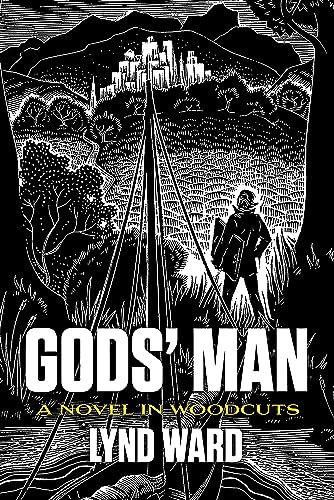 AbeBooks Seller Since 04 May 2006 Seller Rating

The major American artist invented the concept of a wordless novel with this evocative, text-free "woodcut" narrative. Autobiographical in nature, the novel recounts Ward's struggles with his craft and with life in the 1920s. The intricate woodcuts transcend all barriers of language, and fresh details reward the eye with every review. 139 black-and-white illustrations.

The most important work of American artist and illustrator Lynd Ward, Gods' Man is a powerfully evocative novel, told entirely through woodcuts. Ward (1905-85), in employing the concept of the wordless pictorial narrative, acknowledged his predecessors the European artists Frans Masereel and Otto Nückel. Released the week of the 1929 stock market crash, Gods' Man was the first of six woodcut novels that Ward produced over the next eight years. It presents the artist's struggles in a world characterized by both innocence and corruptions and can be considered a forerunner of the contemporary graphic novel, popularized by artists such as Daniel Clowes.
Although best known for his "novels in woodcuts," Ward was also a successful illustrator of children's books. In 1953 he won the Caldecott Medal for The Biggest Bear, which he both wrote and illustrated. His illustrations also appeared in numerous books that received the Newbery Medal. Ward's final work was the acclaimed wordless novel The Silver Pony (1973).
Until now, Gods' Man has only been widely available in high-priced original editions. This top-quality, low-cost republication of Ward's masterpiece will be welcomed by collectors of his work as well as by readers new to his achievement.
Dover (2004) unabridged republication of the edition published by Jonathan Cape and Harrison Smith, New York, 1929.

We are an online retailer.