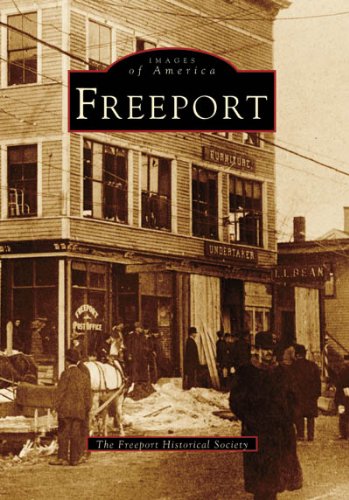 The book has been read, but is in excellent condition. Pages are intact and not marred by notes or highlighting. The spine remains undamaged. Seller Inventory # CIN000501015

There have always been two Freeports: the image presented to outsiders, and the vital, quirky life enjoyed by residents of this small town in Maine. Once part of ancient North Yarmouth, Freeport was set off and incorporated in 1789, making it the sixty-fourth town in what would become Maine in 1820. Photographs have chronicled Freeport's daily life, her changing images, and the milestones of transportation which have pushed her forward. From E.B. Mallet's manufacturing and retail empire to that of L.L. Bean, from South Freeport's shipbuilding and canning industries to the arrival of the summer visitors, there are vivid images which capture both the public and private lives of historic Freeport, and there are photographs of great beauty which chronicle the special character of beloved landscapes."

The archive of the Freeport Historical Society has been a rich and vital resource for the creation of this book. Since its founding in 1969, the historical society has been given photographs of great merit which have been assembled, documented, captioned, and arranged by historians, designers, and researchers who are members of its committees and its staff. With this new book, both residents of Freeport and their visitors will uncover a gateway to reminiscence and a path to discovery.

In 2002, World of Books Group was founded on an ethos to do good, protect the planet and support charities by enabling more goods to be reused. Since then, we've grown into to a global company pioneering the circular economy. Today, we drive the circular economy through three re-commerce brands: - Wob: Through Wob, we sell. We provide affordable, preloved books and media to customers all over the world. A book leaves our collection of over seven million titles and begins a new chapter every two seconds, enabling more goods to be reused. - Ziffit: Through Ziffit, we buy. We give people around the world the opportunity to contribute to the circular economy, earn money and protect the planet, by trading their unwanted books and media. - Shopiago: Through Shopiago, we help others. By sharing the technology that has grown World of Books Group into the business it is today, we?re helping charities increase revenue and reduce waste through re-commerce.


WorldofBooks.com fully embraces the AbeBooks terms and conditions and we will do what we can to resolve any issues.