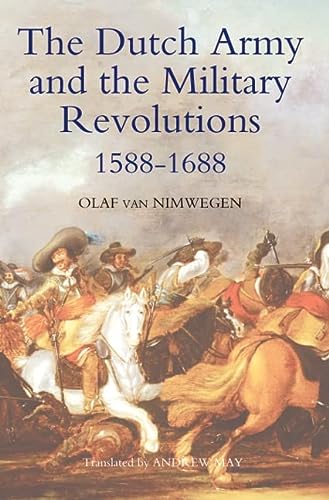 The Dutch Army and the Military Revolutions, 1588-1688 (Warfare in History)

Synopsis: The Dutch army is central to all discussions about the tactical, strategic and organisational military revolution of the early modern period, but this is the first substantial work on the subject in English. This book addresses the changes that were effected in the tactics and organisation of the Dutch armed forces between 1588 and 1688. It shows how in the first decades of this period the Dutch army was transformed from an unreliable band of mercenaries into a disciplined force that could hold its own against the might of Spain. Under the leadership of Maurits of Nassau and his cousin Willem Lodewijk a tactical revolution was achieved that had a profound impact on battle. However, the Dutch army's organisational structure remained unchanged and the Dutch Republic continued to rely on mercenaries and military entrepreneurs. It was not until the latter half of the seventeenth century that the Dutch, under William III of Orange, Captain-General of the Union, introduced revolutionary changes in military organisation and established an efficient standing army. This army withstood attacks by Louis XIV and the Dutch reforms were copied by the English.

Review: A valuable account. [...] Nimwegen's book is much to be welcomed. EUROPEAN HISTORY QUARTERLY

[From the Dutch edition] An outstanding analytical and narrative history of the "mature" Dutch army. JOURNAL OF MILITARY HISTORY

Praise for the original Dutch edition:
Van Nimwegen's book is the first fully fledged overview of the Dutch army in the 17th century. The self-image of the Netherlands as a peaceable nation has for a long time stood in the way of a serious scholarly study of this subject. TROUW [Maarten Prak]
Deserves a central place in any specialist discussion about the army in the Dutch Republic. The richly knowledgeable but level-headed style and the well-chosen quotations will make it appealing to a broader readership as well. BMGN [Jeroen Duindam]