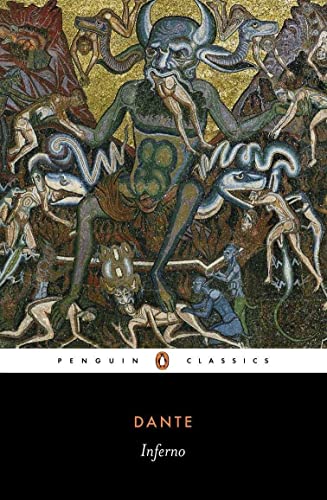 Inferno is the first part of Dante's epic poem The Divine Comedy, revealing the eternal punishment reserved for such sins as greed, self-deception, political double-dealing and treachery. This Penguin Classics edition is translated and edited with an introduction and notes by Robin Kirkpatrick.

Describing Dante's descent into Hell midway through his life with Virgil as a guide, Inferno depicts a cruel underworld in which desperate figures are condemned to eternal damnation for committing one or more of seven deadly sins. As he descends through nine concentric circles of increasingly agonising torture, Dante encounters doomed souls including the pagan Aeneas, the liar Odysseus, the suicide Cleopatra, and his own political enemies, damned for their deceit. Led by leering demons, the poet must ultimately journey with Virgil to the deepest level of all. Portraying a huge diversity of characters culminating in a horrific vision of Satan, the Inferno broke new ground in the vigour of its language and storytelling. It has had a particular influence on Modernist writers and their successors throughout the world.

Printed in English with facing pages in Dante's Italian, this edition offers commentaries and notes on each canto by Robert Kirkpatrick.

Dante Alighieri (1265-1321), scion of a Florentine family, mastered in the art of lyric poetry at an early age. His first major work is La Vita Nuova (1292) an exercise in sonnet form constructed as a tribute to Beatrice Portinari, the great love of his life. It is believed that The Divine Comedy - comprised of three canticles, Inferno, Purgatorio, and Paradiso - was written between 1308 and 1320.

'Kirkpatrick brings to this English Dante both his perfect knowledge of the Italian and an extraordinarily good ear in his own language'
Professor Piero Boitani, University of Rome

Review: "Kirkpatrick brings a more nuanced sense of the Italian and a more mediated appreciation of the poem's construction than nearly all of his competitors. . . . There is much to recommend here-certainly the intelligence, the energy, the linguistic range. . . . His introduction and canto-by-canto notes are remarkably level and lucid, as attentive to structure as to syntax, language and motif, and deftly cross-reference the whole poem. On their own, they would justify the price."
-The Times (London)

"We gain much from Kirkpatrick's fidelity to syntax and nuance, and from the fact that the Italian is on the facing page for our inspection. . . . His introduction . . . tells you, very readably indeed, pretty much all you need for a heightened appreciation of the work. . . . Kirkpatrick edges us, smoothly, into Dante's mind, and shows just how and why his influence has seemed to grow with the passage of time. We even get a map of trecento Italy (nestling against a map of hell). . . . If the Purgatorio and Paradiso are as good as this, then English readers will, I hope, start familiarising themselves with the two-thirds of the work most never get round to reading."
-Nicholas Lezard, The Guardian "The perfect balance of tightness and colloquialism... likely to be the best modern version of Dante.
-Bernard O'Donoghue "This version is the first to bring together poetry and scholarship in the very body of the translation-a deeply informed version of Dante that is also a pleasure to read."
-Professor David Wallace, University of Pennsylvania
"About this title" may belong to another edition of this title.

Book Description Paperback. Condition: Used; Good. **Simply Brit** Shipped with Premium postal service within 24 hours from the UK with impressive delivery time. We have dispatched from our book depository; items of good condition to over ten million satisfied customers worldwide. We are committed to providing you with reliable and efficient service at all times. Seller Inventory # 1268134

Book Description Paperback. Condition: Used; Acceptable. Dispatched, from the UK, within 48 hours of ordering. The book is perfectly readable and fit for use, although it shows signs of previous ownership. The spine is likely creased and the cover scuffed or slightly torn. Textbooks will typically have an amount of underlining and/or highlighting, as well as notes. If this book is over 5 years old, then please expect the pages to be yellowing or to have age spots. Damaged cover. The cover of is slightly damaged for instance a torn or bent corner. Grubby book may have mild dirt or some staining, mostly on the edges of pages. Seller Inventory # CHL7265850

Book Description Paperback. Condition: Good. A tan to the page edges/pages Good condition is defined as: a copy that has been read but remains in clean condition. All of the pages are intact and the cover is intact and the spine may show signs of wear. The book may have minor markings which are not specifically mentioned. Most items will be dispatched the same or the next working day. Seller Inventory # wbb0019637586

Book Description Condition: Good. . Volume 1. English and Italian edition. A copy that has been read but remains intact. May contain markings such as bookplates, stamps, limited notes and highlighting, or a few light stains. Seller Inventory # K15A-01324

5. The Divine Comedy I: Inferno

6. The Divine Comedy I: Inferno

7. The Divine Comedy I: Inferno

8. The Divine Comedy I: Inferno

9. The Divine Comedy I: Inferno

Book Description Condition: Fair. This is an ex-library book and may have the usual library/used-book markings inside.This book has soft covers. In fair condition, suitable as a study copy. Torn end page Please note the Image in this listing is a stock photo and may not match the covers of the actual item,450grams, ISBN:9780140448955. Seller Inventory # 8532590

There are 44 more copies of this book