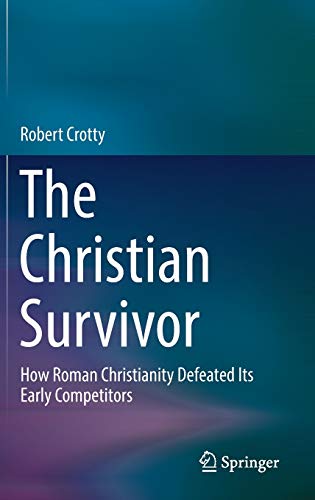 The Christian Survivor: How Roman Christianity Defeated Its Early Competitors

The book puts the current interest in historical Jesus research into a proper historical context, highlighting Gnosticism’s lasting influence on early Christianity and making the provocative claim that nearly all Christian Churches are in some way descended from Roman Christianity. Breaking with the accepted wisdom of Christianity’s origins, the revised history it puts forward challenges the assumptions of Church and secular historians, biblical  critics and general readers alike, with profound repercussions for scholarship, belief and practice.

Robert Brian Crotty is the Emeritus Professor of Religion and Education at the University of South Australia. He has been a Visiting Scholar at the Oxford Centre for Hebrew and Jewish Studies, Oxford University, and a Visiting Fellow at the Woolf Institute, Cambridge University. Professor Crotty was educated in Australia, Rome and Jerusalem. He has research degrees in Ancient History, Education, Christian Theology and Biblical Studies. He is an Élève Titulaire of the École Biblique in Jerusalem. In Rome and Jerusalem, he studied under some of the great scholars of early Christianity, including Ignace de la Potterie, Marie-Émile Boismard and Pierre Benoit and studied Hebrew, Aramaic, Greek, Latin and Syriac in order to further his intimate understanding of biblical texts. He has authored or edited some 33 books, multiple book chapters and journal articles in the areas of Theology, Biblical Studies and World Religions.

2. The Christian Survivor : How Roman Christianity Defeated Its Early Competitors

3. The Christian Survivor: How Roman Christianity Defeated Its Early Competitors

4. The Christian Survivor: How Roman Christianity Defeated Its Early Competitors