Items related to Capitalist Realism : Is There No Alternative? 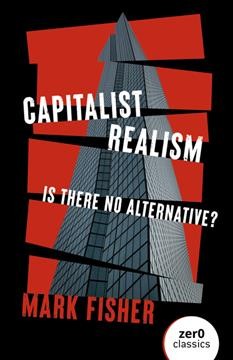 Capitalist Realism : Is There No Alternative?

Title: Capitalist Realism : Is There No Alternative?

After 1989, capitalism has successfully presented itself as the only realistic political-economic system - a situation that the bank crisis of 2008, far from ending, actually compounded. The book analyses the development and principal features of this capitalist realism as a lived ideological framework. Using examples from politics, films, fiction, work and education, it argues that capitalist realism colours all areas of contemporary experience. But it will also show that, because of a number of inconsistencies and glitches internal to the capitalist reality program capitalism in fact is anything but realistic.

Let's not beat around the bush: Fisher's compulsively readable book is simply the best diagnosis of our predicament that we have! Through examples from daily life and popular culture, but without sacrificing theoretical stringency, he provides a ruthless portrait of our ideological misery. Although the book is written from a radically Left perspective, Fisher offers no easy solutions. Capitalist Realism is a sobering call for patient theoretical and political work. It enables us to breathe freely in our sticky atmosphere. --Slavoj Zizek

Mark Fisher is a master cultural diagnostician, and in Capitalist Realism he surveys the symptoms of our current cultural malaise. Living in an endless Eternal Now, we no longer seem able to imagine a future that might be different from the present. This book offers a brilliant analysis of the pervasive cynicism in which we seem to be mired, and even holds out the prospect of an antidote. --Steven Shaviro, Author of Connected and Doom Patrols