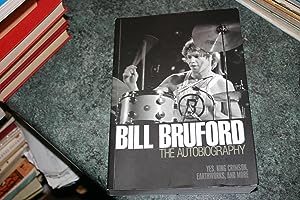 A few dings to the front and rear covers. Heavy book may incur extra postal charges if ordered from overseas. Seller Inventory # 008263

Once called the â€œgodfather of progressive drumming,â€ Bill Bruford has been at the top of his profession for four decades, playing with Yes, King Crimson, Genesis, Earthworks, and many other bands. Bill Bruford is a first-person account of his life in progressive rock, art rock, and modern jazz. Honest, entertaining, and eloquent, it recounts his life on the road and in the studio, rubbing shoulders and creating music with the famous, the less famous, and the infamous. A rocker with the temperament of a classical musician, who became a jazz musician, he defies all the cliches and bad jokes about drummers. At polite dinner parties, Bruford is occasionally asked what he does. After replying that heâ€TMs a musician, the inevitable retort is â€œYes, but what do you really do?â€ This funny, unusual, and unusually thoughtful memoir answers the question.

"An extended treatise on the nature of music itself; not just his place in the pantheon, not just the manifold trials, tribulations and emotional upheavals of the working musician in a marginal genre, but the very essence...Professorial in its remit and written with a bone-dry wit and an authoritative elegance that will be the envy of many far more high-profile cultural commentators."

Olland bookshop is in Bungay, the bookshop is easy to find at 22 Upper Olland Street, just off the town centre. Free parking can be found at Boyscott Lane car park only 100 meters or so from the shop. We are open Monday to Saturday from 10am till 3pm.


We do try and give accurate descriptions of all our books, if you would like more information or pictures - please do not hesitate to email or call us. We are open Monday to Saturday 10am to 3pm. Any books found not to be in the condition expected may be returned within 30 days for a refund.


UK - Books under 2kgs will be sent at the normal shipping rate, for books over this weight we will contact you regarding and further costs.

Non UK - Books under 1kg will be sent at the normal shipping rate, for books over this weight we will contact you regarding and further costs.