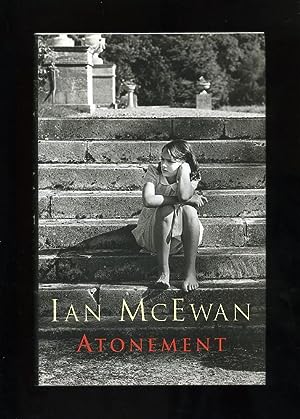 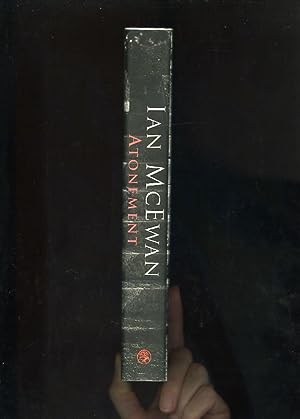 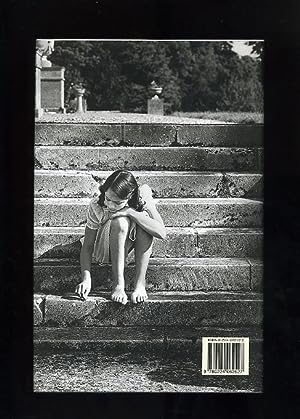 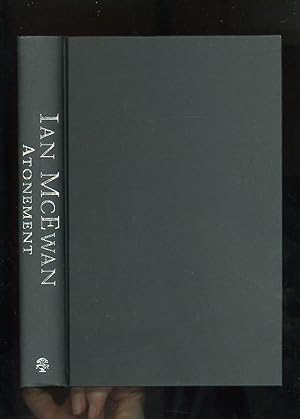 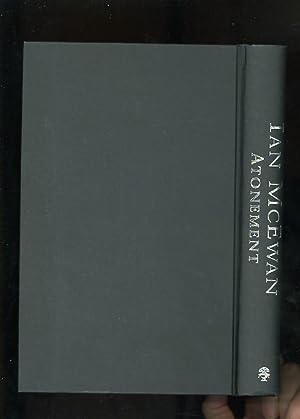 First impression of the true first edition with full number-string sequence including the no. "1" on the publisher's prelims page: 2 4 6 8 10 9 7 5 3 1. ***Near fine in black cloth-covered boards with silver titles to spine. Black front and rear free endpapers and pastedowns. No inscriptions. No foxing. Pages white and clean. Very slight spine lean. Spine tight. In a fine black and white illustrated and white and red printed dustwrapper that has not been price-clipped, showing the original publisher's price of Ł16.99. No tears. No fading. Red titles to spine and front panel of dustwrapper bright. ***372 pages plus one page of acknowledgments to rear. 242 x 160 mm. ***First impression of the true first edition of Ian McEwan's fine literary novel. ***For all our books, postage is charged at cost, allowing for packaging: any shipping rates indicated on ABE are an average only: we will reduce the P & P charge where appropriate - please contact us for postal rates for heavier books and sets etc. Seller Inventory # 3098

On the hottest day of the summer of 1935, thirteen-year-old Briony Tallis sees her older sister Cecilia strip off her clothes and plunge into the fountain in the garden of their country house. Watching Cecilia is their housekeeper's son Robbie Turner, a childhood friend who, along with Briony's sister, has recently graduated from Cambridge. By the end of that day the lives of all three will have been changed forever. Robbie and Cecilia will have crossed a boundary they had never before dared to approach and will have become victims of the younger girl's scheming imagination. And Briony will have committed a dreadful crime, the guilt for which will color her entire life. In each of his novels Ian McEwan has brilliantly drawn his reader into the intimate lives and situations of his characters. But never before has he worked with so large a canvas: In "Atonement "he takes the reader from a manor house in England in 1935 to the retreat from Dunkirk in 1941; from the London's World War II military hospitals to a reunion of the Tallis clan in 1999. "Atonement" is Ian McEwan's finest achievement. Brilliant and utterly enthralling in its depiction of childhood, love and war, England and class, the novel is at its center a profound-and profoundly moving-exploration of shame and forgiveness and the difficulty of absolution.

Atonement is Ian McEwan's ninth novel and his first since the Booker Prize-winning Amsterdam in 1998. But whereas Amsterdam was a slim, sleek piece, Atonement is a more sturdy, ambitious work, allowing McEwan more room to play, think and experiment.

We meet 13-year-old Briony Tallis in the summer of 1935, as she attempts to stage a production of her new drama The Trials of Arabella to welcome home her elder, idolised brother Leon. But she soon discovers that her cousins, the glamorous Lola and the twin boys Jackson and Pierrot, aren't up to the task, and directorial ambitions are abandoned as more interesting preoccupations come onto the scene. The charlady's son Robbie Turner appears to be forcing Briony's sister Cecilia to strip in the Fountain and sends her obscene letters; Leon has brought home a dim chocolate magnate keen for a war to promote his new "Army Amo" bar; and upstairs Briony's migraine-stricken mother Emily keeps tabs on the house from her bed. Soon, secrets emerge that change the lives of everyone present...

The interwar upper-middle-class setting of the book's long, masterfully sustained opening section might recall Virginia Woolf or Henry Green, but as we move forward--eventually to the turn of the 21st century--the novel's central concerns emerge, and McEwan's voice becomes clear, even personal. For at heart, Atonement is about the pleasures, pains and dangers of writing, and perhaps even more, about the challenge of controlling what readers make of your writing. McEwan shouldn't have any doubts about readers of Atonement: this is a thoughtful, provocative and at times moving book that will have readers applauding.--Alan Stewart

We specialize in 20th Century literature, and in particular, Modern First Editions. We would be interested in buying such books, whether individual items or collections. We are particularly interested in Bloomsbury writers, Beats & Counter Culture and 20th C photography monographs. Our books can be viewed as a whole on ABE, or by choosing one of a number of catalogues that we have set up for particular interests, such as Crime Fiction & True Crime, Collectable Paperbacks, Children's Literature etc.


Mastercard, Visa and PayPal accepted. We also accept personal cheques for UK sales, made out to Orlando Booksellers (UK pounds). Proof of postage is obtained for all items, however, we cannot be responsible for items lost or damaged in transit. Therefore, on higher value items, we offer the option of tracked (insured) shipping which offers peace of mind for both the bookseller and the customer. [See Shipping Terms section below for more information]. We always pack our books extremely well to pr...


For all our books, postage is charged at cost, allowing for packaging materials; any shipping rates indicated on ABE are an average only; for the UK, our standard rate is for first class, and the priority rate includes tracked (signed for) delivery; for International sales, our standard rate is for Airmail delivery, and the priority rate is for tracked (International signed for) delivery. We would prefer that you choose the priority rate (tracked option) for higher value books of say Ł50 or more. Please note that we will always reduce shipping fees where appropriate e.g. for smaller (lighter) books when we accept your order. For heavier books and sets etc. we will often 'soak up' the extra cost, but on occasion, we may need to charge more than the quoted shipping fee. However, customers will always have the option to either accept or decline the revised order amount. We will also reduce the overall shipping fee for multiple orders. We will endeavour to ship all books within two business days of receiving your order.