Items related to The Art of War: Treatise on Chinese Military Science...

The Art of War: Treatise on Chinese Military Science Compiled About 500 B.C 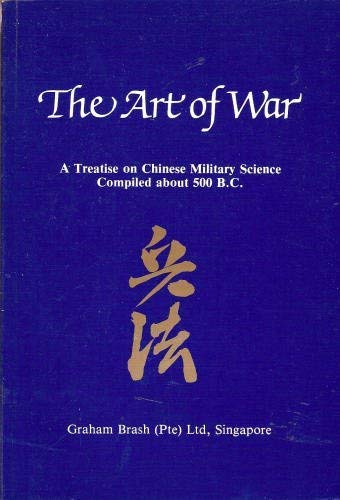 The origins and authorship of China's oldest military classic, The Art of War remains unknown, but it is generally believed that the book in its present form is a composite of several military treatises which existed during the period of the Warring States (476-221 B.C.). Over 2000 years have passed since the original book was compiled, yet The Art of War remains surprisingly full of sound, relevant thinking and instruction on traditional combat and warfare.

Buy Used
Occasion - Bon Etat - The art of... Learn more about this copy

Shipping: FREE
From France to U.S.A.

1. The art of war. Treatise on chinese military science compiled about 500 b. C - Sun Tzu

Book Description Heian International Publishing, Incorporated. Paperback. Condition: Good. A copy that has been read, but remains in clean condition. All pages are intact, and the cover is intact. The spine may show signs of wear. Pages can include limited notes and highlighting, and the copy can include previous owner inscriptions. At ThriftBooks, our motto is: Read More, Spend Less. Seller Inventory # G9971947277I3N00

Book Description Graham Brash (Pte) Ltd, Singapore., 1989. Soft cover. Condition: Very Good. Used book, clean and bright, looks unread with a little shelfwear. A treatise on Chinese Military Science compiled about 500 B.C. Just as water flows from a higher level to a lower level, an army should avoid strength and attack weakness.just as water adapts to the contours of the land, an army should adapt its plans to suit the enemy. Just as water has no fixed form, warfare has no inflexible rules. Seller Inventory # 7015836