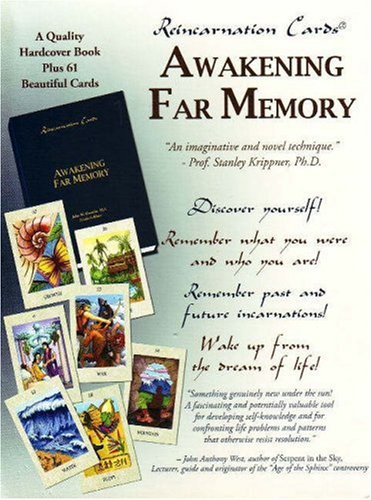 A boxed set containing a hard cover book and 61 full-colour cards depicting diverse historical periods, occupations, cultures and manner of termination, all designed to provoke "far memories" of both past and future incarnations. The book gives detailed instructions on how the cards are to be used to recall such far memories by following a carefully designed system embedded within this set, for which patents are pending. The chapter, "The Evidence" presents solid scientific, physical and anecdotal evidence for reincarnation. A summary of quantum physics breakthroughs and their relevance to understanding this phenomenon includes quotes from such respected scientists as Planck, Einstein, Schrodinger and de Broglie. This approach provides a fresh look at the stunning implications of quantum physics for understanding the true nature of time, space, consciousness and the paranormal. By presenting a philosophical framework to bring greater clarity and understanding of reincarnational experiences, the authors enable readers independently to gain an insight into who they really are and their purpose in the universe. The set has been called "something new under the sun" by author-lecturer John Anthony West, originator of the "Age of the Sphinx" controversy, and a "stunning, consciousness-expanding work" by the renowned transpersonal psychologist and educator, Dr Stanley Krippner, in his Foreword to the book. Suitable for readers and researchers of any age or background, it is an ideal gift for anyone of an enquiring mind that is open to a message that is far older than the pyramids, yet as new as tomorrow.

This is not a parlor game, any more than are Tarot cards; nor is it New Age crystal sniffing, any more than are ESP or meditation. Despite the hostility of both our educational establishment, and Western institutionalized religions, a large percentage of the world persists in believing in reincarnation. Recalling past lives, however, is usually a hit-or-miss affair, occurring spontaneously (mostly in early childhood then disappearing from memory) but later in life requiring the aid of a trained therapist/ facilitator. Since there are testable, specific techniques for developing other latent human faculties (e.g., altered states of consciousness, ESP in its many forms) Knowles and Leblanc have applied similar principles to accessing our hidden past life memories. These unique cards represent symbolic memory templates of specific historical milieus. They are designed to be activated by correctly directed attention ... and then voila, the chances are good that deeply hidden (and multiple) memories will rise to the surface and you will finally know who you were and what you did as your former selves (and then you'll just have to live with it ... though that's another matter.) A fascinating and potentially valuable tool for developing self-knowledge, and for confronting certain persistent life problems and patterns that otherwise resist resolution. - John Anthony West, author-lecturer, originator of the 'Age of the Sphinx' controversy. --John Anthony West, author-lecturer, originator of the 'Age of the Sphinx' controversy.

You will know you have something special in your hands when you first hold the box that encompasses the book AWAKENING FAR MEMORY and the beautifully crafted REINCARNATION CARDS that accompany it. But proceed slowly, for you ll want to place yourself in the proper frame of mind when you start to work with the cards. Yes, I said work. As the authors remind us, the cards are not a type of game but a powerful tool offering insight and knowledge into the circumstances of other apparent embodiments . But that s not to say that the book is not extremely deep. What it is is a well researched examination of the idea of reincarnation. By slowly investing us with knowledge on this subject we are given the chance to weigh our current beliefs with what the authors proffer. This works superbly as a lead up to how you use the cards. Having a desire to find out where and what we may have been in a previous incarnation usually goes hand in hand with bits of mystery about our current embodiment. What you say, you have no bits of mystery? Well much to your delight when you ve chosen a card from each of the five groups and go back to read about their basic meanings, questions will be answered that you haven t even asked. So, find a quiet time and place and bring the book and the cards. Should you choose, add your pendulum to these and maybe even a little incense to create a far memory mood. Let your mind take in the information and combine it with some personal resonance. Becoming one with the Universe its past, present, and future will ensure that secrets are revealed to help in this incarnation and those to come. Donna Coomer, Between The Lines Reviews 05 May 2007 --Donna Coomer, Between The Lines Reviews 05 May 2007

John Marett Knowles, M.A. Econ. (Ottawa), Canadian philosopher and parapsychologist, was born in New York in 1923. Pilot and Intelligence Officer, Royal Canadian Air Force (1941 45). A pre-Pearl Harbor American volunteer, he flew 'Hurricane' fighters on 146 Squadron, Royal Air Force and was a 'Chindit' officer under General Wingate, attached to a British infantry column behind enemy lines in Burma, 1944. He was a post-war, career Public Servant with the Canadian Government (diplomat, consul, trade official) and United Nations (consultant, project manager, senior adviser to governments), serving in many countries worldwide over many years. A lifelong student of philosophy following a life-transforming mystical experience at the age of eight, his first published philosophical work, Advanced Concepts of Management, was written as part of a training program that he designed for trade commissioners of the People s Republic of China and taught in Beijing in 1986. Other philosophical essays have since appeared in appropriate British, American and Cypriot journals. He speaks English, French, German, Italian, Spanish and has a working knowledge of Greek and several other languages. Linda Anne Leblanc, was born in Ottawa, Canada, in 1953. Beginning in 1977, she accompanied her husband, John Knowles, in his assignments around the world with the United Nations. She also worked in various United Nations organizations in Geneva, Switzerland. She is an accredited Outreach Trainer of The Monroe Institute, facilitating Hemi-SyncÛ and other workshops. Both a lecturer and a writer, her articles have appeared in magazines and publications in Cyprus and the USA. She speaks English, French and has a working knowledge of Greek. Following their retirement to the Eastern Mediterranean island of Cyprus in 1989, they continue to pursue lifelong interests and studies in philosophy, consciousness, the paranormal, including the UFO phenomenon, sacred sites and ancient civilizations. They have attended many residential programs at The Monroe Institute in Virginia and completed the Summer Study Program at the Institute for Parapsychology (Rhine Research Center), Durham, N.C. In 1999, they founded PSYCHOGNOSIA, a not-for-profit organization based in Cyprus, for the study and the dissemination of scientifically accurate information on the paranormal.

Book Description Book & Merchandise. Condition: New. Book & Merchandise. Tap into mushrooming interest in reincarnation, consciousness expansion and exploration with this quality book and card set. A patent pending self-directed research tool, it enabl.Shipping may be from multiple locations in the US or from the UK, depending on stock availability. 204 pages. 0.684. Seller Inventory # 9789963667000