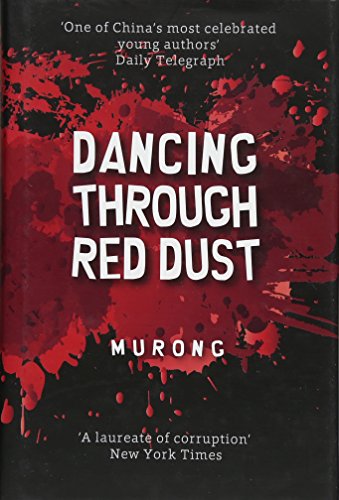 A vast panoramic novel of patchwork brilliance, relentless energy and dark humour:, Dancing Through Red Dust is the story of a corrupt lawyer who ends up on China's death row. This a gripping thriller that delves into the secretive world of China's legal system. Lawyer Wei Da destroys evidence, hides his assets and plans to flee China. About to escape, he is incarcerated in the horrific Cao River Remand Centre. The worst of human nature is exhibited here and even as Wei Da tries to atone, the day of his execution encroaches.

Celebrated for his darkly funny tales of contemporary Chinese urban life, New York Times columnist Murong has emerged as one of China's leading dissident voices. His writing became a cult hit amongst young middle class Chinese looking for writing that pushed the boundaries of what was acceptable literature. In 2010 he won China's leading literary prize but was prevented from accepting it. Through his NYT column, and speeches in New York, Oslo and Hay, he has emerged as a beacon for independent writers everywhere.

Book Description Paperback. Condition: Good. The book has been read but remains in clean condition. All pages are intact and the cover is intact. Some minor wear to the spine. Seller Inventory # GOR007483062

Book Description Hardcover. Condition: Good. A tan to the page edges/pages . Minor shelf wear Good condition is defined as: a copy that has been read but remains in clean condition. All of the pages are intact and the cover is intact and the spine may show signs of wear. The book may have minor markings which are not specifically mentioned. Most items will be dispatched the same or the next working day. Seller Inventory # wbb0019218941

Book Description Hardcover. Condition: Very Good. First Edition. A hardback First Edition (UK) in Very Good or better condition, Near Fine, in a similar dustjacket. This book is in stock now, in our UK premises. Photos of our books are available on request (dustjacket and cover illustrations vary, and unless the image accompanying the listing is marked 'Bookseller Image', it is an Abebooks Stock Image, NOT our own). Overseas buyers please also note that shipping rates apply to packets of 750g and under, and should the packed weight of an item exceed this we reserve the right to ship via 'Economy', or request extra postage prior to fulfilling the order, or cancel. Seller Inventory # mon0000129046