Cool! Bangkok: Your Essential Guide to What's Hip and Happening 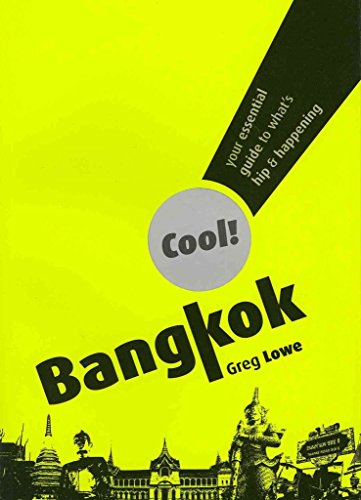 Cool Bangkok is your guide for where to shop, dine, party and sleep in style in one of the world's most popular travel destinations. Featuring more than 130 clubs, bars, restaurants, hotels and other venues, all of which have been carefully selected for their individuality and personal flair, this book enables you to strike off from the capital s well-trodden tourist paths and confidently explore side streets and hot spots in search of new experiences. Suitable for tourists and residents alike, the guide profiles a range of places that are testament to the city's diversity, whether you re after haute couture or urban fashion, molecular gastronomy or fiery street food, or stripped-back blues or Dutch electro. As cool isn't synonymous with cost, care has been taken to include venues that match a range of budgets, suitable for anyone from fashionistas to dime-store divas.

Greg Lowe is a Bangkok-based British journalist who's a British journalist who settled in Bangkok ten years ago after mountain biking around Mongolia, Tibet, Nepal and Thailand. He has written for a number of regional and international newspapers, including The Guardian, South China Morning Post, The Business Times and Bangkok Post, as well as lifestyle magazines and websites such as Travel + Leisure Southeast Asia, CNNGO.com, Fah Thai and Jetstar. When he s not checking out the latest bars and restaurants around Bangkok, Greg divides his time between training Bagua Zhang in Lumpini Park, procrastinating and being on the receiving end of his daughter Isabel's bilingual sarcasm, which is pretty impressive for a three-year old

1. Cool! Bangkok: Your Essential Guide to What's Hip and Happening

Book Description Marshall Cavendish International, 2011. Paperback. Condition: Good. Good condition is defined as: a copy that has been read but remains in clean condition. All of the pages are intact and the cover is intact and the spine may show signs of wear. The book may have minor markings which are not specifically mentioned. Most items will be dispatched the same or the next working day. Seller Inventory # mon0011068646

3. Cool! Bangkok: Your Essential Guide to What's Hip and Happening

Book Description Marshall Cavendish 2012-09-06, 2012. Paperback. Condition: Good. Item is in good condition. Some moderate creases and wear. This item may not come with CDs or additional parts including access codes for textbooks. Might be an ex-library copy and contain writing/highlighting. Seller Inventory # DS-9812618740-3