Items related to Fortresses and Castles of Greece: Southern and West...

A. Pardissis Fortresses and Castles of Greece: Southern and West Central Greece v. 2 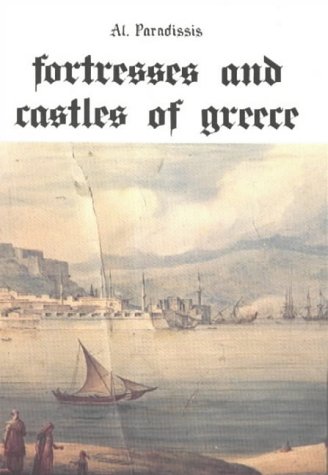 Greece is strewn with hundreds of castles and fortresses of all ages and civilisations. This rugged and curious region in the southernmost part of Europe, at the vantage point of the Mediterranean, so close to Asia and Africa is full of Acropoli, castles and fortresses either on top of mountains or on coasts. There exist walls of neolithic citadels six and seven thousand years old, Acropoli two and three thousand years old, castles and fortresses of Venetian, Frankish, Byzantine and others as old as three thousand years and even more. This series by the eminent historian Alexander Paradissis, is perhaps the only study of the subject covering the whole of Greek history. The comprehensive material, maps, plans and illustrations will satisfy historians and tourists alike. Volume One covers Northern and East Central Greece; Volume Two covers Southern and West Central Greece; Volume Three covers the Greek Islands.

Book Description Paperback. Condition: Good. The book has been read but remains in clean condition. All pages are intact and the cover is intact. Some minor wear to the spine. Seller Inventory # GOR009340907

Book Description Efstathiadis Group, 1996. Condition: Good. A+ Customer service! Satisfaction Guaranteed! Book is in Used-Good condition. Pages and cover are clean and intact. Used items may not include supplementary materials such as CDs or access codes. May show signs of minor shelf wear and contain limited notes and highlighting. Seller Inventory # 9602262907-2-4