Items related to Portuguese Missionary Grammars in Asia, Africa and...

Otto Zwartjes Portuguese Missionary Grammars in Asia, Africa and Brazil, 1550-1800 (Studies in the History of the Language Sciences)

Portuguese Missionary Grammars in Asia, Africa and Brazil, 1550-1800 (Studies in the History of the Language Sciences) 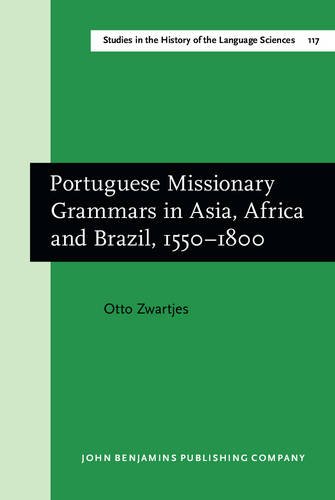 From the 16th century onwards, Europeans encountered languages in the Americas, Africa, and Asia which were radically different from any of the languages of the Old World. Missionaries were in the forefront of this encounter: in order to speak to potential converts, they needed to learn local languages. A great wealth of missionary grammars survives from the 16th century onwards. Some of these are precious records of the languages they document, and all of them witness their authors’ attempts to develop the methods of grammatical description with which they were familiar, to accommodate dramatically new linguistic features.This book is the first monograph covering the whole Portuguese grammatical tradition outside Portugal. Its aim is to provide an integrated description, analysis and evaluation of the missionary grammars which were written in Portuguese. Between them, these grammars covered a huge range of languages: in Asia, Tamil, four Indo-Aryan languages and Japanese; in Brazil, Kipeá and Tupinambá; in Africa and the African diaspora, Kimbundu and Sena (from the modern Angola and Mozambique respectively).Each text is placed in its historical context, and its linguistic context is analyzed, with particular attention to orthography, the parts of speech system, morphology and syntax. Whenever possible, pedagogical features of the grammars are discussed, together with their treatment of language variation and pragmatics, and the evidence they provide for the missionaries’ attitude towards the languages they studied.