Items related to Poetics of the Gnostic Universe: Narrative and Cosmology...

Plese, Zlatko Poetics of the Gnostic Universe: Narrative and Cosmology in the Apocryphon of John (Nag Hammadi and Manichaean Studies): 52

Poetics of the Gnostic Universe: Narrative and Cosmology in the Apocryphon of John (Nag Hammadi and Manichaean Studies): 52 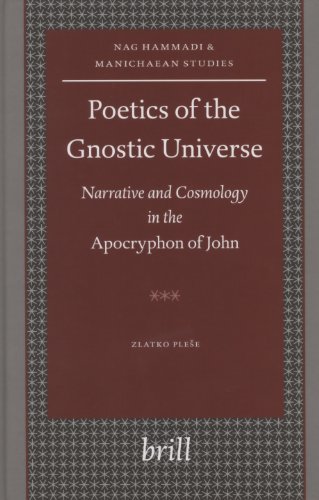 This volume is both an essay in Gnostic poetics and a study in the history of early Christian appropriation of ancient philosophy. The object of study is the cosmological model of the Apocryphon of John, a first-hand and fully narrated version of the Gnostic myth. The author examines his target text against a complex background of religious and philosophical systems, literary theories, and rhetorical techniques of the period, and argues that the world model of the Apocryphon of John is inseparable from the epistemological, theological, and aesthetic debates within contemporary Platonism. Poetics of the Gnostic Universe also discusses the composition and narrative logic of the Apocryphon of John, explores its revisionist attitude towards various literary models (Plato's Timaeus, Wisdom literature, Genesis), and analyzes its peculiar discursive strategy of conjoining seemingly disconnected symbolic 'codes' while describing the derivation of a multi-layered universe from a single transcendent source.

"Plese's book is an impressive contribution to scholarship on the Apocryphon of John and on Gnosticism in general."
Birger A. Pearson, University of California, Santa Barbara

Zlatko Plese, Ph.D. (1996) in Classics, Yale University, is Associate Professor of Graeco-Roman Religion and Early Christianity at the University of North Carolina at Chapel Hill. He has published on Plutarch, Middle Platonism, Gnosticism, Coptic literature, and early modern Latin historiography, and is currently working on a critical edition of the seventh volume of Shenoute's Discourses.