Items related to The Role of Metals in Ancient Greek History (Mnemosyne,...

The Role of Metals in Ancient Greek History (Mnemosyne, Supplements) 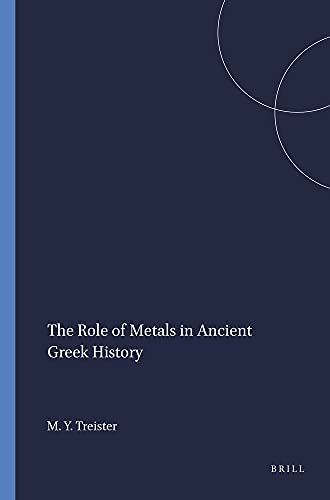 The first in-depth study of the field in more than 20 years analyzes the role of various metals in the context of Greek economic life, politics, culture and art, traces the movement of metal from ore to finished objects, including works of art, and shows the relations between the regions where metals were extracted and the centres of metalworking, the structure of the workshops and the connections between them and the role of the workshops in economic life at different stages in Greek history. In doing so it adopts a multidisciplinary approach, defining the role of metals in the history of Greek society using the widest possible variety of sources: the excavated remains of workshops and hoards, archaeometallurgical finds; the results of studies of ancient mines and analyses of ancient metal objects; bronze plastics and jewelry, coins etc. The chronological span of the study is the 8th-1st centuries B.C., i.e. from the beginning of the main period of Greek colonization till the end of the Hellenistic era. The geographical scope of the work is the Greek oikumene. New to most scholars will be Treister's knowledge of objects and technologies in the eastern Greek and Roman world of the Northern Black Sea and Colchis. While this book does not pretend to be a definitive survey of the history of mining and metallurgy in the Greek world, it is a particularly useful interim report.

The Role of Metals in the Ancient Greek History Examines the role of various metals in the context of Greek economic life, politics, culture and art. Tracing the movement of metal from ore to finished objects, the book discusses topics such as the structure of the workshops and their role in economic life at different stages in Greek history. Full description

'...no one has assembled the source evidence so far with such detail, and as critical and bibliographical guide to a vital archaeological-historical subject its appearance is timely...'
John Boardman, Colloquia Pontica, 1997.
'This well-researched book is the first of his kind...The sheer mass of the material - a good deal of it from Russian sources and thus inaccessible to most of us - is a major asset...'
Hans van Wees, The Classical Review, 1999.