Items related to Faith in Democracy 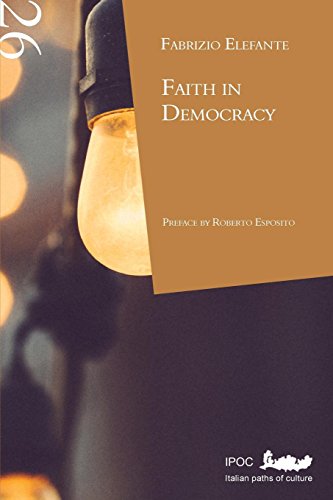 "Populist - mediatic - democracy is...totalitarianism compatible with democracy...The irreducibility of intellectuals to masses is the disjunctive element or function of the totalitarian mental field." This is, in brief, the path that awaits the reader: an instructive - at times even painful - "journey" through our cultural koinč, which gradually proves to be an economic koinč, monopolized and debased by publicity and consensus logic. The form of democracy that we are experiencing today is mediatic, a form unknown in the past but now in need of fresh criticism and, as a result, foreign to theoretical developments of former centuries. The Greek etymon "power of the people" has no longer value. It is replaced by "power of the media," which is at the same time an area of discussion and social interaction. The principle of majority, peculiar to democracy, becomes the instrumentum regni of mediatic power: a fictitious majority earned from TV shares is presented according to the canons of democratic rhetoric, and commercial logic takes over democratic rhetoric. "Consumption is democratic expression; discourse is aristocratic privilege... imaginary gratification and the resumption of illiteracy spurred on by spectacular society." The only option available to augment democracy consists in reducing the asymmetry of knowledge among citizens, until we allow democratic participation only to those who will have the necessary cultural qualifications. "Democratic form, debased and turned clownish by business and populist folklore, will be able to recover vital lymph through the work of its artists, through the drafting of new forms of relationship between the proper and the common." With a literary style that resembles both that of Heraclitus and Debord, this book captivates, draws enthusiasm, "demoralizes" and destructures clichés in which we are immersed, thus revealing at the same time new paths of enquiry so we can give meaning to our lives of individuals belonging to a community.