Items related to Dianetics: The Modern Science of Mental Health 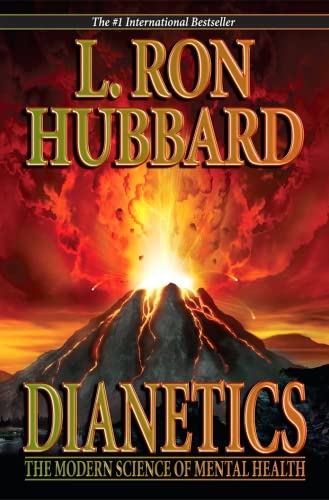 You naturally have: Self-confidence, a mindset for growth, the ability to focus clearly, happiness, positivity and inner peace. Anything that pulls you down from that is in your own mind. Would you be able to clear your mind from one unsuspected, but critical factor, you would naturally have the above qualities (again). Dianetics reveals what this factor is - a secret in plain view. You can change it now. Just reading the book and finding out what is happening an inch behind your forehead, opens up a brand new perspective, much simpler and more clear than you ever thought. But Dianetics goes far beyond theory. It describes an easy to use procedure to give you access to your inner self. The practical success people have with it made Dianetics an international bestseller, maintaining top positions for months and selling over 23 Million copies in 51 languages. For the application of the procedure it is recommended to also watch the corresponding DVD called How to Use Dianetics.

Dianetics can remove the aberrations which make man a selfish and anti-social creature.... It holds hope that man may at last dispense with the ugly institution of war, because wars are the end product of social aberrations at the national level... Dianetics can rectify the mental short circuits which bring accidental death, can increase longevity, minimize the pain of child-bearing and present mankind with vast new intellectual vistas... --Los Angeles Daily News

I look, understand, decide and act. No more inner conflict. Thanks to Dianetics, I am achieving my goals. --Chick Corea, 22 Grammy Award winning Jazz Musician

The word Dianetics comes from the Greek dia, meaning "through"
and nous, meaning "soul", and is defined as "what the soul is doing to the
body." Dianetics is a methodology which can help alleviate unwanted
sensations and emotions, irrational fears and psychosomatic illnesses
(illnesses caused or aggravated by mental stress). It is most accurately
described as what the soul is doing to the body through the mind. The mind
is basically a communication and control system between the person and his
environment. It is composed of mental image pictures, which are recordings
of past experiences. The individual uses his mind to pose and solve
problems related to survival and to direct his efforts according to these
solutions. What is the Reactive Mind? The reactive mind is the portion of a
person's mind which works on a totally stimulus-response basis, which is
not under his volitional (willing) control, and which exerts force and the
power of command over his awareness, purposes, thoughts, body and actions.
The source of any negative emotion, attitude or feeling is fully revealed
in Dianetics. The causes of a person's feelings of grief or loss are buried
in the person's reactive mind, able to influence and control the person.
Dianetics technology guides a person through his or her reactive mind to
locate -- and permanently eradicate -- the actual source of the upset. With
the cause of the upset handled, the person is once more able to live a
happy, healthy life.

Book Description Paperback. Condition: new. Paperback. What if you could free your thoughts and shed their weight and pain from your own mind? This is what Dianetics is about. What triggers our thinking? What is the mind really? What is the source of stress? Dianetics is the breakthrough that has enabled us to understand for the first time how our thinking works - consciously and subconsciously. Shipping may be from multiple locations in the US or from the UK, depending on stock availability. Seller Inventory # 9788779897717