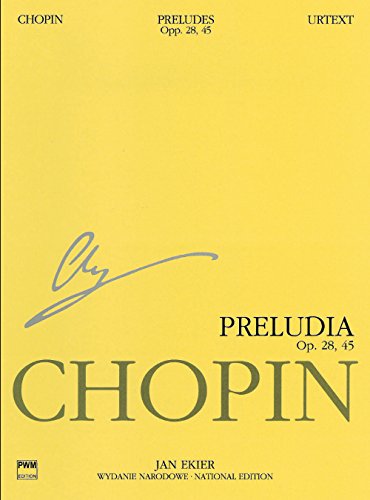 (PWM). The Preludes of Op. 28 include all 24 major and minor tonalities arranged in a circle of fifths, with each major key being followed by its relative minor. Contrary to custom of using this type of piece as didactic material, Chopin's cycle was intended as concert music. The Preludes are a diverse variety of mood, tempo, articulation, texture, etc. The National Edition of the Works of Fryderyk Chopin Published by PWM Exclusively Distributed by Hal Leonard Corporation Co-Editors Jan Ekier and Pawel Kaminski The objective of the National Edition is to present Chopin's complete output in its authentic form, based on the entire body of available sources. Sources were analyzed with up-to-date scientific and musicological methodology. The National Edition was based on sources originated from the composer, mainly autographs, copies of autographs and first editions with the composer's corrections, and pupils' copies with Chopin's annotations. In cases when original sources were lacking, the closest possible materials were used. Collecting the source materials was a laborious task which took years of effort. The characteristics of sources, the links and discrepancies between them as well as the reasons for particular editorial decisions are discussed in the Source Commentary in each volume. The Performance Commentary appended to each volume includes: the realization of ornaments, comments on pedal markings (the original markings sometimes are inadequate, due to the difference in sound between pianos used in Chopin`s times and modern pianos), suggestions as to the "harmonic legato" (a performance technique often used by Chopin and now forgotten). About the National Edition Full Introduction to the Polish National Edition of the Works of Fryderyk Chopin